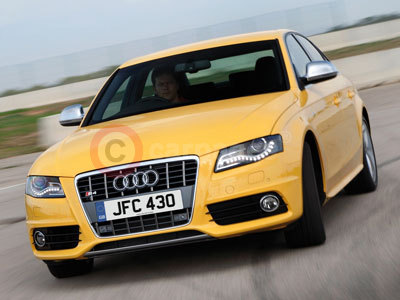 An advanced new high-tech driver aid from the inventors of quattro permanent four-wheel drive is now available in the UK in the new Audi S4. The new sports rear axle, which transforms quattro handling characteristics while retaining the inherent safety benefits of all-wheel-drive, makes its debut in the new supercharged performance Saloon and Avant, and will extend its influence further across the Audi range in the near future.

With its new active sport differential, Audi elevates the road dynamics of the new Audi S4 quattro to a new level. A unique electronic regulating system distributes torque from the engine in continuously variable proportions left and right between the rear wheels, the resulting controlled power flow enabling the car to take corners even more responsively, and to retain its directional stability for considerably longer. With its help the potential for adjustment of the cornering line is much increased and understeer effectively becomes a thing of the past.

Predictive Rather Than Reactive Correction

With the new sport differential influencing drive to the rear wheels, the Audi S4 exhibits exceptional traction and stability. Close to the car's handling limits, it acts like ESP, but with the principle reversed: corrective movements are not initiated solely by altering the engine settings or applying the brakes, but also by controlled redistribution of tractive force. As a result the car's progress is distinctly smoother and more free-flowing, since ESP comes into action much less frequently

Depending on steering angle, lateral acceleration, yaw angle, road speed and other signals, the Audi S4's control unit calculates the most suitable distribution of torque to the wheels for every driving situation. When the steering wheel is turned, for example, or the car accelerated in a corner, power is redirected in a controlled manner to the outer rear wheel. This has the effect of 'forcing' the Audi S4 into the corner so that the angle of the front wheels is followed accurately. The difference in tractive force between the left and right rear wheels also exerts a steering effect, so that the usual steering corrections by the driver are no longer needed. As a result understeer, or the tendency for the Audi S4 to run wide at the front, is to all intents and purposes eliminated.

Buttons on the centre console enable drivers to vary the operating parameters of the sport differential as part of the Audi drive select adaptive dynamics system in three stages. In the 'comfort' mode, driving safety and the Audi S4's stability have absolute priority, with optimal damping of load reversals. In the 'auto' mode the program calculates the best possible balance between all the functions. Finally, the 'dynamic' mode emphasises the functions contributing to maximum agility, so that the action of the sport differential is most easily felt. In this case, response to load reversals is both agile and easily controllable.

State Of The Art Engine

The Audi S4's brand new 3.0-litre, V6 power unit produces 333PS in the S4 thanks to a supercharger generating a seamless flow of power from 440Nm of torque. This new unit replaces the V8 engine of the previous Audi S4 and thus delivers a 26 per cent cut in fuel consumption and CO2 without any penalty in terms of performance. The 0-60mph sprint is accomplished in 5.1 seconds.

Audi S4 Images may not be UK specification cars. Colours and exterior and/or interior elements may differ from actual models.