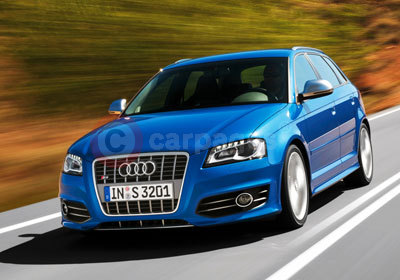 The Audi S3 is now not only available with five doors, but also with seven speeds courtesy of the much lauded S tronic twin-clutch transmission, which not only quickens shifts compared with the continuing manual version, but also slows down fuel consumption. Available to order from October 1st at an extra cost of £1,450, the super slick transmission takes OTR prices for the first ever ‘two pedal’ S3 models to £28,920 for the three-door and £29,420 for the five-door Sportback. UK deliveries are expected to start in mid-December.

Equipped with S tronic, the three-door S3 can touch 62mph from rest in 5.5 seconds, 0.2 seconds quicker than the manual version with which it shares its governed top speed of 155mph.  Equally impressively, S tronic actually boosts the S3’s combined fuel economy figure from 33.2mpg to 34mpg – a feat which the majority of conventional torque converter automatic transmissions couldn’t match. As a result, CO2 output in the S3 S tronic falls from 198g/km to 193g/km.

Advanced electro-hydraulic controls and the alternate use of two clutches enable the S tronic gearbox to deliver lightning fast automatic or manual shifts with virtually no interruption of the engine’s power delivery across its seven ratios, and to offer changes via steering wheel-mounted shift paddles for the first time in the S3’s nine-year history.  The first of the two clutches serves the odd-numbered gears and reverse, and the second the even-numbered gears, so when the S3 is being driven in third gear, for instance, fourth is already pre-selected in anticipation. As soon as the shift command is given, the first clutch is disengaged and the second engaged in just a few hundredths of a second, virtually seamlessly.

Also faster reacting in this latest S3 model is the renowned quattro four-wheel-drive system. Its central hydraulic multi-plate clutch now responds even faster when the engine's 265PS and 350Nm need to be redistributed between the front and rear wheels to maximize stability and traction.