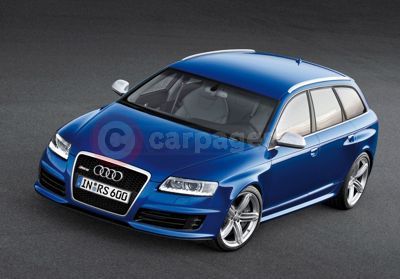 The most powerful production Audi of all time - the new RS 6 quattro Avant - will make 580PS-worth of presence felt to the crowds at the forthcoming Frankfurt Motor Show (September 13-23 2007).

The new biturbo, ten-cylinder super Avant - the eagerly awaited successor to the revered original RS 6 quattro of 2002 - will open for UK ordering from November for an OTR price expected to be in the region of £75,000. First deliveries will follow in spring 2008, and later that year a saloon variant will also become available.

The basis for the latest RS flagship is the 435PS S6 quattro with its exceptionally compact, naturally aspirated ten cylinder engine enhanced by FSI direct petrol injection. Two turbo chargers and extensive component refinements boost the output of this acclaimed unit to 580PS at 6,250rpm, and increase torque from 540Nm to 650Nm, available from just 1,500rpm right through to 6,250rpm.

As a result, the RS 6 quattro with optimised six-speed tiptronic automatic transmission can blast to 62mph from rest in 4.6 seconds and to 124mph in just 14.9 seconds, only relenting when the electronic governor cuts in at 155mph.

Yet despite the considerable exertions of its two newly adopted turbo chargers, the mighty V10 nevertheless retains surprisingly ‘real world’ fuel economy, with up to 20.3mpg possible on the combined cycle, only slightly behind the naturally aspirated V10 powering the S6 quattro. FSI direct petrol injection - which minimises the amount of fuel used in each combustion cycle through injection directly into the combustion chamber rather than via the intake manifold - can be thanked for this impressive efficiency.

To reach the tarmac via the suitably imposing 19-inch, or optional 20-inch, alloy wheels, the barrage of power passes through the latest generation quattro four-wheel-drive system with standard 40:60 front-to-rear torque split, ensuring that it translates seamlessly into smooth, safely contained and uninterrupted performance.  The feeling of unflappable composure is emphasised further by a new, all-hydraulic version of the Dynamic Ride Control (DRC) system that won plenty of praise in the original RS 6 quattro and has since been used in the RS 4 quattro.

DRC connects shock absorbers on each side of the car diagonally to their counterparts by way of a central valve, which directs a flow of oil to provide additional damping force whenever a shock absorber is compressed, making for impressive gains in handling precision and stability. New to this latest RS 6 quattro is an optional three-stage selectable control for this system, which allows the driver to choose from three damper settings - comfort, dynamic and sport – according to preference and conditions.

Also overseeing proceedings in the most powerful Audi in the range is a specially reconfigured version of the Electronic Stability Programme which has been programmed to intervene as late as possible, maximising driving pleasure without compromising ultimate safety. If required, the ESP system can be completely deactivated.

The most crucial safety feature, namely the ventilated all-disc braking system, is of course more than up to the task of reining in this most extreme of Audi Avants, and an upgrade to ultra high performance ceramic brakes with even more exceptional performance and fade resistance is also available at extra cost.

The incredibly assured handling this advanced set-up permits can be enjoyed from the comfort and support of the cabin’s sculpted and ultra-grippy leather and alcantara-upholstered RS sports seats, the driver’s positioned perfectly in relation to the flat-bottomed RS sports steering wheel with multifunction controls and transmission shift paddles. Additional RS features in the much praised interior also include boost pressure and oil temperature readouts, milled finish door handles and aluminium-look pedals. The familiar A6 Avant virtues, not least its potential 1,660-litre load capacity, are of course very much in evidence.

Audi RS 6 Images may not be UK specification cars. Colours and exterior and/or interior elements may differ from actual models.