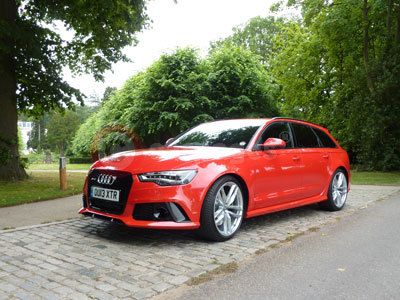 Audi has a strong record of producing ‘hot’, high-performance RS models that combine supercar pace with everyday practicality. The RS6 Avant is a prime example. New for the summer of 2013, it is a sizzling performer masquerading as a load-lugging executive transporter. At first glance it appears to be nothing more exotic than an upmarket estate car, but look closer and discreet badges tell the story of something much more special. Lurking under the bonnet is a stonking four-litre V8 engine, and this is by far one of the quickest cars in Audi’s range.

A look at the figures immediately tells you that everything about it is on a much higher plain that your average estate car. It has a four-litre V8 engine, one that punches out as much power as five typical family hatchbacks combined. There are two turbochargers. The auto gearbox has eight speeds. It has quattro four-wheel-drive. Acceleration to 62 mph takes less than four seconds. This car is even quicker than the standard version of Audi’s own R8 supercar.

The price of the RS6 Avant is extravagant, but so is its exceptional performance. At £76,985 it is a lot of car for the money, with its electrifying pace and sumptuously kitted out cabin.

The RS6 Avant's engine is a 3,993 cc twin-turbocharged V8 that develops a mighty 552 bhp of peak power at between 5,700 and 6.600 rpm. Peak torque is 516 lb ft sustained over a rev range from 1,750 to 5,500. With a 0-62 mph acceleration time of 3.9 seconds, it is almost half a second quicker than the previous model RS6 Avant, despite having a smaller engine. Fuel economy is much improved, with an official combined average fuel figure of 28.8 mpg. CO2 emissions at 229 g/km, although sounding quite high, are also much better, down by a third compared with the predecessor. This puts it in band L for the annual VED tax disc.

The car's tech spec includes stop-start technology to avoid wasting fuel with an idling engine, and cylinder deactivation to reduce fuel use when more modest demand is being made on the engine. Under lower loads, two cylinders are cut out to give fuel efficiency more like that of a V6.

What a performer this car is. Squeeze the throttle, and it takes off like a rocket. A car with this level of performance needs brakes to match, and the RS high-performance braking system pulls it to heel with dramatically swift, clean efficiency. It feels like a supercar to drive, even if it looks nothing like one.

This is a 8-year+ news article, from our Audi archive, which dates back to the year 2000.

Audi RS 6 Images may not be UK specification cars. Colours and exterior and/or interior elements may differ from actual models.