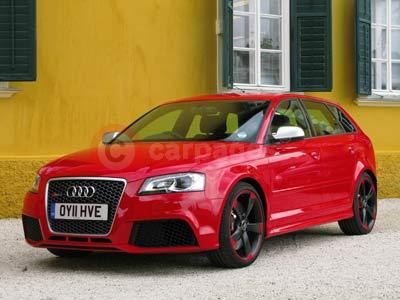 Audi announced in late 2010 its intention to introduce an RS 3 as a sports performance model based on the third generation A3 hatchback, and it was launched on the UK market as a relatively exclusive, low volume model in June 2011. Only 500 examples of the car are being produced in right-hand-drive for UK customers. Made in Gyor, Hungary, the RS 3 Sportback is the most powerful Audi of its size, with a turbocharged 2.5 litre, five-cylinder TFSI engine (the same engine as in an Audi TT RS), a seven-speed S-tronic automatic gearbox with steering column paddles, and quattro four-wheel-drive.

Visually the RS 3 is not substantially different from an A3, with the addition of a few subtle enhancements to the design that identify it to those with a discerning eye. The car has been given new front wings made of lightweight carbon fibre-reinforced polymer, which save 1.8 kg compared with standard steel wings on an A3. The front bumper is deeper with twin air intakes. Larger, 19-inch alloys are fitted, the better to fill the wheel arches for a beefier stance. There are discreet sill extensions, a rear roof spoiler and a black front diffuser.

There is only one body style, the Sportback. Perhaps surprisingly, there is no manual version on offer, in contrast with what you might normally expect in a high performance model. Audi's rationale is that there would be insufficient demand for one because most customers will prefer the S-tronic transmission. The price is £39,930.

Very few cars, and even fewer compact models, are as rapid as this one is. The acceleration is electrifying, as the very quick 0-62 acceleration time of 4.6 seconds confirms. The RS 3's five-cylinder engine, boosted by a turbocharger that generates up to 1.2 bar of boost pressure, delivers 335 bhp at between 5,400 and 6,500 revs. Peak torque of 332 lb ft comes in at 1,600 rpm and is sustained right through to 5,300 rpm, an unusually long torque curve that bears witness to the car's sustained exuberance.

The quoted top speed is a maximum of 155 mph, electrically governed to that level. The engine is equipped with an on-demand oil pump and a regenerative braking system to recapture energy that would otherwise be lost when the car decelerates. Considering the exceptionally high level of performance, the combined cycle average fuel economy figure of 31.0 mpg is really not too bad. The CO2 figure of 212 g/km, though, incurs a group K rating for VED, costing £260 for the first year's tax disc, and £580 subsequently. Benefit-In-Kind company car taxation is at a rate of 32 per cent.

The seven-speed double clutch auto gearbox does suit the car very well. There are Drive and Sport settings to vary the gearbox's shift pattern and throttle response, the former for normal driving and the latter for faster, more urgent responses. It lets you choose when to shift ratios, making selections via the well-positioned steering column paddles. Or you can leave the box in Drive to let it take control and choose the change points for you, which is does very efficiently and virtually seamlessly.

It would be hard to imagine a more responsive behaviour from a 2.5 litre petrol engine than this one achieves. It takes off with such verve and enthusiasm that an appreciative grin becomes the inevitable default setting for the driver.