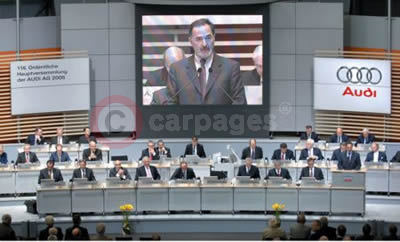 Audi succeeded in setting another new record for vehicle sales in the first four months of 2005. "This puts Audi on course for another record year. This year we will be able to reap the benefits of our work over the past months and years with our young and attractive cars. But we will continue to expand our model range in the future with highly emotional, sporty products," said the Chairman of the Board of Management of AUDI AG, Prof. Dr. Martin Winterkorn, today at the company’s 116th Annual General Meeting in Neckarsulm. "The latest example is the Audi Q7, a completely new kind of sporty SUV which we will be launching in early 2006." As Winterkorn confirmed to the company’s shareholders: "We have our sights firmly fixed on our goal of increasing annual sales to more than one million Audi vehicles in the medium term."

Record unit sales and revenue in the first four months

Sales records in 25 markets worldwide, 18 of which in Europe

Audi further expanded its sales organisation last year and set up its own sales companies in the flourishing markets of Australia, South Korea and Dubai.

"Our strategy is to improve sales performance and customer orientation in all our markets," explained Winterkorn. The success of this strategy is already apparent in the first four months of this year. In this period, sales records were posted in all three markets which have their own sales company. 1,571 vehicles (up 46.4 per cent) were sold in Australia, 680 in South Korea (up 300 per cent). The sales company in Dubai sold 1,164 vehicles (up 87.4 per cent).

In the first four months of this year, Audi increased its sales in Germany by 3.6 per cent to 77,973 vehicles. "This development in our domestic market, which defies the general trend, is clear evidence of the strength and appeal of our brand," said Winterkorn. Audi sold 128,776 vehicles in Western Europe excluding Germany, 14.7 per cent more than in the same period last year. Sales in Europe totalled 213,705 units (up 10.8 per cent).

Commitment to Germany as a production location

"Audi is a healthy company which is committed to Germany as a production location," said Winterkorn. Last month, the company management and general works council at AUDI AG signed the plant agreement ?The future of Audi - performance, success, participation’. This rules out layoffs for economic reasons up to the year 2011, thus protecting the 45,000 or so employees at the Ingolstadt and Neckarsulm plants. "This plant agreement enables us to ensure that Audi can continue to develop and build cars in Germany on very competitive terms," explained Winterkorn.

Revenue, profit, production and vehicle sales at an excellent level in 2004

Rupert Stadler, Member of the Board of AUDI AG for Finance and Organisation, presented details of the 2004 financial year to shareholders. The revenue generated by the Audi Group rose by 4.7 per cent to EUR 24.5 billion. Profit before tax was up by 3.7 per cent to EUR 1,142 million. Profit after tax improved by 7.4 per cent to a record figure of EUR 871 million. "Over the past few years we have been able to demonstrate that the Audi Group is capable of operating extremely successfully in the market over a longer period in spite of a difficult economic context, not least thanks to its systematic process and cost optimisation measures," Stadler emphasised. Despite unfavourable exchange rate factors and the difficult market situation, Audi demonstrated high earning power in the past financial year and consequently also initiated a positive turnaround again for profit before tax.

The Audi brand set a new sales record in 2004 for the eleventh year in succession: an increase of 1.2 per cent to 779,441 vehicles worldwide. Best-ever figures were recorded in 21 of the 50 or so largest sales markets.