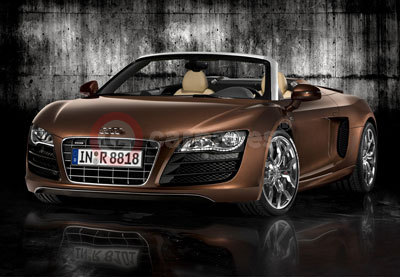 The flagships of the Audi model range and the Audi Centre retail network will combine to stunning effect as the new open-top Audi R8 Spyder takes pride of place within the new 190,000 square-foot West London Audi for the Centre's grand inauguration ceremony.

Making its debut in front of over 300 guests at the new West London landmark, the new Audi R8 Spyder with fully automatic lightweight fabric hood brings added wind-in-hair intensity to the already extreme driving experience delivered by the lightweight aluminium, mid-engine and quattro-equipped super car. Based on the 525PS, 5.2-litre FSI model, but featuring a bespoke body incorporating additional weight-saving carbon fibre composite panels, the new open-air Audi R8 will be available to order in the UK from November in six-speed manual and six-speed R tronic automated manual forms priced at £109,580 OTR and £114,670 OTR respectively. UK deliveries will start in the first quarter of 2010.

The conversion process in the striking new soft-top is typically quick and easy, the electrohydraulically controlled hood opening and closing at the touch of a button in 19 seconds at speeds of up to 31mph. When lowering it folds like a Z beneath the automatically activated cover of its storage compartment above the ten cylinder engine.

Standard equipment for the Audi R8 Spyder includes all-LED headlights - a world first for Audi in the Audi R8 V10 - and inside an extended leather package featuring Fine Nappa leather, the Audi Music Interface iPod connection system (or a CD changer as required) linked to a Bang & Olufsen sound system, heated seats, DVD satellite navigation and unique new seatbelt-mounted microphones which make it possible to talk on the phone even with the top down on the motorway.

Like its Coupe relative the Audi R8 Spyder 5.2 FSI quattro, which was developed in cooperation with quattro GmbH, delivers absolutely uncompromising performance. The naturally aspirated V10 engine, much of which is hand-built, produces 530 Nm (390.91 lb-ft) of torque at 6,500 rpm and peak output of 525PS at 8,000 rpm as it revs freely to its 8,700 rpm limit.

Performance reflects this awesome potential: 0 - 62mph in 4.1 seconds; 0 - 124mph in 12.7 seconds; a top speed of 194mph for the six-speed manual version - all delivered with a heady ten-cylinder soundtrack that is of course even easier to savour in this open-top model.

Handling is optimised by quattro permanent all-wheel drive that distributes power to all four wheels with a heavy rear bias, and by Audi magnetic ride, which uses magnetic fields in the shock absorbers to adjust their response to road conditions within milliseconds and adapt to the driver's style.

The limelight is likely to be stolen from the beautiful new open-top to a certain extent by the building that will house it for its UK debut. West London Audi - the world's largest Audi Centre - is the result of an investment of six years and £45 million by Audi UK, and will house up to 116 display cars on three of the seven storeys that make up its 190,000 square-foot 'footprint'. Many of the cars on display from the now 33-strong Audi model range will be visible from the elevated section of the M4 which flanks the imposing new London landmark.

The highly distinctive new Centre will be operated by the Sytner Group, and will be staffed by around 100 personnel. Within 12 months of the doors officially opening to the public on Monday October 19, approximately 30,000 customers are expected to have passed through its doors