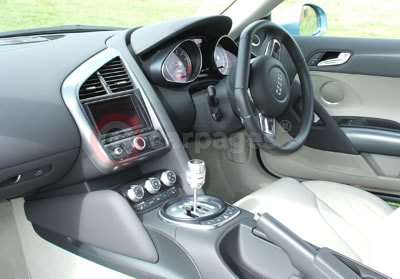 The cabin is divided into two, separate areas. This can be said of most cars - by necessity, the driver’s side is different to the passenger’s - but in the R8 it is more pronounced. For instance, the driver has a completely different door handle. This is part of the so-called, ‘monoposto’, which creates the feeling of being in a single-seater, cockpit. A large arc rises from the side of the central tunnel and climbs around the instrument nacelle before joining with the door handle, to complete the downward extension.

Beneath the large cowl of the nacelle, are two cam-shaped instrument clusters, separated by a display screen. I particularly liked the way that the red needles pinged across to their furthest position, on start-up, indicating that all systems are ready for action and it’s time to take hold of the flat-bottomed, multi-functional steering wheel.

To the left of the monoposto, is a centre console but rather than the usual symmetrical shape, it has a curve that cuts across the air vents, in an extension of the ‘arc’. Below this is a small gap that separates the, well-packed central tunnel, from the centre console. It must be a design feature as it is open-ended and little use for storage purposes.

Taking pride of place on the central tunnel is the open-gated gearshift, surrounded by a solid metal plate. The bolt-action shift is nicely weighted and the tactile gear-knob looks and behaves like a precision tool.

Moving further back, the ashtray and two cup-holders, sit alongside the parking brake and set into the rear step, just before the bulkhead, was a CD autochanger. This was an optional extra on the test car, costing £320 and therein lies a niggle.

An Audi R8 with manual gearbox costs a minimum of £76,825 on the road. The R-tronic, automatic version is £82,025, so you might think that Audi could run to including an autochanger. As it stands, the standard audio system is a single radio/CD player with facilities for MP3 playback and memory cards, a 6.5-inch display and 7 speakers. The Satellite Navigation system adds £1,800, GSM ‘phone preparation is an extra £420 and pushing the boat out further, £1,200 buys a Bang & Olufsen sound system.

It could be argued that the fine Nappa leather upholstery goes some way to mitigating the parsimony but there are other items that might be expected as standard. Take the electrically-adjustable seats at £830, for example, and, if you want them heated, add £275. That said, the sports seats, with electric lumbar support, are very comfortable.