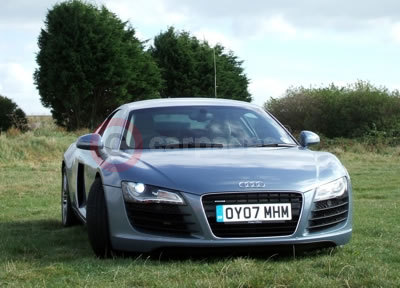 The Audi R8 is a thing of beauty - an automotive, supermodel.

With the experience of the Le Mans-winning R8 as a basis, although it looks nothing like it, the road-going R8 has the power to turn heads, even when it is stationary. This is due to a combination of exclusivity and the unusual styling, that has caused a stir since the first photos were released, in October, 2006.

The designers had the task of combining typical Audi design characteristics, of elegance through simple but strong lines, with the need to force huge volumes of cooling air to the engine and brakes. The final result is a front end with the ubiquitous, Audi grille flanked by two large air intakes, just above the front sill.

The test car had running-lights formed of a strip of 12 LEDs, below the main headlamp cluster, which looked like diamante eye-liner, further enhancing the supermodel tone. At the time of writing, the headlights were Xenon but Audi tells us that by the end of 2007, the R8 will be the world’s first vehicle to be equipped with LEDs for all lighting functions.

Strong design-lines flow rearward over the wings, following the pronounced front wheel arches, before continuing along the broad shoulder-line to the innovative side panels. Some people said that this feature, especially in silver, reminded them of a smart car. However, it is more than a design gimmick as it captures air, flowing along the contoured doors, and directs it into the engine bay. It also has the effect of visually separating the engine area from the passenger compartment, where degrees of separation are also evident.

The general consensus was that the R8 was best viewed from the rear. It isn’t surprising as the compact V8 engine is clearly visible through its glass cover and the large, finned, rear air intakes above two twin tailpipes are impressively imposing.

The designers didn’t want to ruin sleek lines, through the use of a large, rear spoiler, so an underbody diffuser was created and a discrete, narrow spoiler pops up when the car reaches 62mph. It drops down again below 22mph but can be locked in its extended position via a button on the central tunnel.