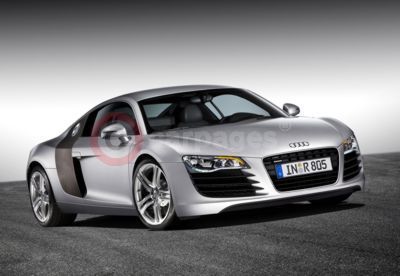 Vorsprung durch Technik infiltrates the rarefied world of the sports car elite this week as the new Audi R8 makes its world public début at the 2006 Mondial de l’Automobile in Paris (September 30th to October 15th).

Scheduled to open for UK ordering in late 2006, with prices expected to start from around £77,000. The new ultra-high performance Audi R8 combines the time-honoured hallmarks of the best of the classic sports cars with futuristic construction, transmission and suspension technologies, all underpinned by the steadfast reassurance of the quattro four-wheel-drive system.

Mounted longitudinally directly behind the cockpit of the comparatively lightweight, 1,560-kilogramme aluminium-bodied Audi sports car is a high-revving V8 petrol engine delivering 420PS, and contributing to an exceptional power-to-weight ratio of 269PS per tonne. Spinning freely to its 8,250rpm limit, this acclaimed unit punches the R8 through the 62mph barrier in just 4.6 seconds and, in the right conditions, can carry it on to a top speed of 187mph - an unprecedented high for a road-going Audi.

Driving purists can choose a six-speed manual transmission to channel the 430Nm of torque to the four driven wheels, but they may also be tempted by the racing-inspired R tronic sequential shift gearbox with joystick and paddle control, which uses ‘shift-by-wire’ technology to provide exceptionally rapid gear changes.

By mounting the potent eight-cylinder unit as close as possible to the centre of the new R8, in deference to racing legends such as the Le Mans-winning R8 sports prototype and Auto Union Type C Grand Prix car, Audi engineers have achieved near perfect 44 per cent front / 56 per cent rear weight distribution for optimum handling balance. Dry sump engine lubrication - another racing-derived element - also furthers this aim by enabling the V8 to be mounted as close to the road as possible to lower the centre of gravity.

This classic configuration, combined with advanced Audi Space Frame (ASF) construction mating lightweight aluminium panelling to an aluminium space frame, provides the very best operating conditions for the futuristic chassis, which itself contains a high proportion of aluminium components. The front and rear double wishbone suspension delivers exceptional agility, and can be controlled by either a more traditional spring-and-damper set-up giving a remarkably composed and comfortable ride by super car standards, or by the advanced Audi magnetic ride system first seen in the new TT Coupé.

The sophisticated dampers fitted as part of the optional Audi magnetic ride system swap conventional damper fluid for a magnetorheological fluid containing minute magnetic particles that can be influenced by an electromagnetic field. By applying a voltage to the system’s electromagnets, the viscosity of the fluid is altered by the affected magnetic particles, increasing resistance to damper movement to iron out pitch and roll when necessary, and reducing resistance when ride comfort takes precedence. The system constantly monitors road conditions and driving style and reacts accordingly.

The relationship between the road and the 19-inch 5 double spoke design alloy wheels - fitted with 235/30 size tyres at the front and 295/30 size at the rear - is made crystal clear at all times by the fast-reacting hydraulic rack-and-pinion steering. That relationship is also constantly moderated by the legendary quattro permanent four-wheel-drive system, which by apportioning power to front and rear axles in constantly varying degrees dictated by road conditions prevents the tendency for ‘waywardness’ sometimes exhibited by powerful mid-engine, rear-drive sports cars. An electronically activated rear spoiler also deploys when sensors detect that composure at higher speeds would benefit from additional down-force.

The stunning lines of the 4.43-metre long, 1.90-metre wide and 1.25-metre high R8 are accentuated by its striking bi-colour paint finish, with ‘side blades’ in a contrasting shade and a choice of eight colour combinations.

Beneath the skin is a deceptively spacious two-seat cabin with more than a hint of racing car inspiration in its layout and appearance, and typical Audi luxury evident in its extensive Fine Nappa leather upholstery and trim and generous equipment. The 2.65-metre wheel base also makes provision for surprisingly accommodating luggage space behind the seats and also in the front compartment ahead of the cabin, which has a 100-litre capacity.

The new R8 will be built at the Audi facility in Neckarsulm, Germany - the centre of Audi aluminium construction expertise, and also the home of the brand’s quattro GmbH high performance subsidiary. A total of 15 cars will be built per day, each element of the production process being controlled and subjected to intense scrutiny by small teams of specialists.