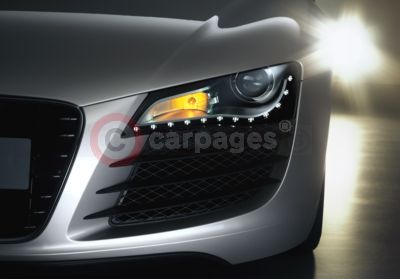 Festive lighting is all around us, but some sources are much more unusual than others. Car maker Audi, for example, has used LED illumination to spectacular effect in its new R8 sports car, which will not only pierce the night sky with a total of 24 front-mounted LED driving lamps and 186 LED brake lights, but will also shed light on a component that is rarely visible - the engine.

Due to be launched by the Vorsprung durch Technik brand next spring priced from £76,725, the 187mph 2-seater is available with an optional interior light package that not only includes Light Emitting Diode (LED) cabin illumination, but also bathes the engine compartment in LED light, drawing onlookers' attention to its powerful eight cylinder unit through its clear glass 'bonnet'.

On the outside, the 24 LEDs also conspire to create a remarkably distinctive and immediately recognisable front view. Inspired by the design of the Sydney Opera House, the R8's head lamp units incorporate 12 LED daytime running lights on each side that follow their pronounced curves. Combined with bi-xenon dipped and main beam head lights, and a total of 186 LED tail lights, they will not only give the R8 maximum road presence, but will also enhance safety for the driver and surrounding road users.

Audi UK Director Jeremy Hicks commented: "The importance of seeing and being seen on the roads is obviously brought into sharp focus at this time of year, and with its new LED technology our new R8 will be pretty hard to beat on both fronts. With the help of Audi innovations such as the quattro four-wheel-drive system we have always strived to deliver high performance as responsibly and safely as possible, and this hugely impressive lighting technology underlines that fact yet again."

Customer deposits for the new Audi R8 have been taken by the UK Audi Centre network since its world public debut at the 2006 Mondial de l'Automobile in Paris in late September, and these have already accounted for all right-hand-drive production slots allocated right through to mid-2008.