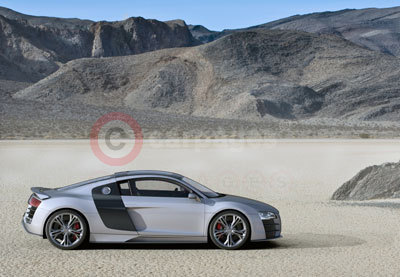 Audi is exploring the possibility of breaking yet another mould with a road-going diesel super car based on the R8. The R8 V12 TDI Concept, which makes its debut in Detroit this month, replaces the production sports car's V8 FSI petrol engine with a 12-cylinder TDI endowed with an incredible 1,000Nm of torque.

Fresh from ripping up the Le Mans racing rulebook with the diesel-powered R10 TDI, Audi is exploring the possibility of breaking yet another mould with a road-going TDI super car based on the R8. The R8 V12 TDI Concept makes its debut at this month’s North American International Auto Show in Detroit, replacing the production sports car’s mid-mounted petrol FSI V8 with a 12-cylinder TDI endowed with an incredible 1,000Nm of torque.

First seen in the forthcoming Q7 V12 TDI SUV, the 6.0-litre twin-turbo V12 with 500PS is similar in basic concept to the R10 TDI’s 5.5-litre race engine, and delivers its colossal 1,000Nm output from just 1,750rpm, guaranteeing the effortless delivery of a 4.2-second 0-62mph acceleration time and a top speed in excess of 186mph.

Despite its astonishing statistics, this remarkable engine shows the necessary restraint when it comes to environmental impact. Its fundamental efficiency, achieved through the use of an advanced common rail fuel injection system enhanced by piezo injectors, is complemented by twin particulate filters and a new state-of-the-art ultra-low emission system that ensures compliance with proposed EU6 emission limits expected to apply from 2014.

The heart of the system is a special catalytic converter downstream of the oxidizing catalyst and the particulate filter. The second component is an additional tank containing an aqueous urea solution. Small quantities of the solution, known as "AdBlue," are injected into the exhaust system. The hot exhaust gases break the solution down to form ammonia that splits the nitric oxides into inert nitrogen and water. The system remains effective for the entire service life of the vehicle.

The V12 TDI Concept is equipped with the advanced Audi magnetic ride adaptive damping system, which swaps conventional damper fluid for a magnetorheological fluid containing minute magnetic particles that can be influenced by an electromagnetic field. By applying a voltage to the system’s electromagnets, the viscosity of the fluid is altered by the affected magnetic particles, increasing resistance to damper movement to iron out pitch and roll when necessary, and reducing resistance at times when ride comfort is of greater importance. The system constantly monitors road conditions and driving style and reacts accordingly.

A specially tailored version of Audi drive select, the adaptive dynamics system introduced recently in the new A4 Saloon, also helps to personalise the driving experience. Offering ‘Dynamic’, ‘Sport’ and ‘Race’ settings, it enables further fine-tuning of the magnetic ride dampers and the parameters of the engine and transmission. When the ‘Race’ setting is selected on a circuit, the interior instrument lighting changes from white to red and the onboard satellite navigation system displays navigation information relating to the specific circuit being driven, along with a lap timer. Supplementary information including centrifugal force and boost pressure can also be accessed in this mode.

Whether on road or circuit, the R8 is effectively moderated by high-performance carbon fibre-reinforced ceramic brakes, and by the legendary quattro permanent four-wheel-drive system, which by apportioning power to front and rear axles in constantly varying degrees dictated by road conditions prevents the less desirable handling traits often exhibited by powerful mid-engine, rear-drive sports cars.

Additional downforce to help the quattro system suck the car to the tarmac at speed is provided by a specially developed, larger version of the production road car’s automatically extending rear spoiler, combined with a fully clad diffuser under-body and special measures such as diffuser apertures in the rear bumper. Air is not only channelled in a way that accentuates the R8’s widely acclaimed handling capabilities, but is also effectively captured by racing-derived NACA ducts within the new glass roof over the passenger compartment to cool the potent V12.

The engine itself is also displayed in all its glory beneath a clear glass cover, through which special air deflectors can also be seen in the Concept. At only 684mm in length, the surprisingly compact 12-cylinder is only 166mm longer than the V8 TDI, which means that with the help of the long 2.65-metre wheelbase the sensation of space which sets the R8 apart from rivals is barely compromised.

Inside, the V12 TDI Concept is distinguishable by its additional aluminium and carbon fibre elements, and by its figure-hugging racing-style sports seats. On the outside, it is marked out by all-LED lights, enlarged inlet and outlet ducts at the front, side and rear, the modified rear spoiler and exclusive alloy wheels