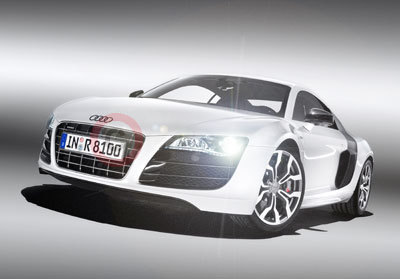 The order book has opened for the Audi R8 V10 and with it the German car manufacturer demonstrated another element of its pioneering Vorsprung durch Technik technology.

The range-topping R8 is the first car in the world to be equipped with all-LED (light emitting diode) headlamps. For the first time the high intensity diodes have been used for low beam and high beam settings, as well as for daytime running lights and indicators, intensifying the sports car’s visual drama.

The LED headlamp of the Audi R8 is the first representative of a completely new generation of headlamps using only light emitting diodes which in itself reduces CO2 emissions. An interior light package including LED footwell lighting, light and rain sensors and LED engine compartment lighting also comes as standard on the 196mph “supercar”.

The first all-LED headlights represent the triumph of an idea for Audi. Dr. Wolfgang Huhn, Head of the Light and Visibility Department at Audi, explains: “A lot of people initially viewed this development as a mere marketing gimmick. Yet everyone who has seen these lights in action is not only astonished by the excellent output but also thrilled with the homogenous distribution of light and the agreeable, daylight-esque colour of the light.”

Audi was the first car manufacturer to recognize the potential of revolutionary LED lighting technology and then incorporate it during development of its vehicles and can now boast a technological edge putting it “light” years ahead of the competition.

Integrated into the broad bumper as striking strips of light, the fog lights were a sensation not merely in a technical sense. The strip-shaped lights were also aesthetically pleasing and very popular with the public.

The 12-cylinder Audi A8 went into series production soon afterwards as the world’s first vehicle with LED daytime running lights. High-performance light-emitting diodes as a light source for headlights had never previously been seen. Huhn added: “Audi blazed trails with LED technology. And even though we’re years ahead of our direct competitors, this field continues to bear tremendous potential for us. Our research counts on the ‘Vorsprung durch Technik’ typical at Audi and no one can imagine our designs without it.”

LEDs can also reduce a vehicle’s fuel consumption. When daytime running lights become mandatory in the European Union in May 2011, Audi models with on-board LED technology will be ahead of the competition.

Drivers in a lot of European countries – such as Italy, Denmark, Finland, Estonia, and Sweden – already must use their lights during the day. As a result, just one vehicle’s conventional low-beam headlights, taillights, and license-plate illumination consume some 200 watts – which the alternator must constantly generate.

By comparison, a mere 15 watts is required to power the new Audi A4’s modern LED daytime running lights, which have the added advantage of far better visibility for other road users. All in all, that equates to a decrease of about 0.2 litres of fuel per 100 kilometres and about 4 grams fewer CO2 emissions per kilometre.

A statistical example clearly illustrates the significance of these figures: Thanks to this new technology, the Audi models with LED daytime running lights sold in 2008 alone consumed – during just their first year in use – about 10 million fewer litres of fuel and emitted approximately 25,000 fewer metric tons of CO2.

The discovery of “digital light”

Lumens per watt are the “horsepower” of light. For the sake of comparison, an ordinary household light bulb generates about 20-25 lumens per watt. A modern passenger vehicle’s xenon headlights, on the other hand, are very energy-efficient and create some 80 lumens per watt.

The first LED headlights in the Pikes Peak concept generated 18 lumens while the next generation of white high-performance LEDs hit the market this year with a whopping 100 lumens per watt – surpassing the efficiency of xenon lights for the first time.

“Digital light” can be made more or less bright electronically and precisely adapted to a driver’s needs. Audi developers are convinced that future generations of headlights will react to weather conditions, a vehicle’s speed, the distance between vehicles, and potentially dangerous objects.

Huhn concluded: “We’re striving to create intelligent headlights and taillights which think and anticipate in the interest of enhancing a driver’s safety and comfort. For example, there are already high-beam headlights in pre-series development which will allow drivers to navigate roads at night without temporarily blinding oncoming drivers. This is made possible by a variable distribution of light: An electronic system continuously calculates the distance to any approaching vehicles to ensure that the road ahead is ideally illuminated at all times – without irritating oncoming drivers.”