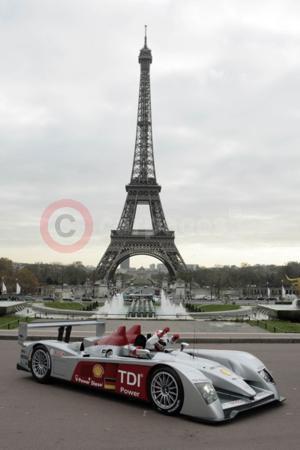 Audi will become the world’s first car manufacturer to fight for overall victory with a diesel-engined sportscar in the famous Le Mans 24 Hours. The Audi R10 was unveiled in Paris today (13th December) with the German prestige car maker aiming for its new "open-top" sportscar to continue in the wheeltracks of its ultra-successful predecessor.

The all-new Audi R10 is powered by a totally new 5.5-litre, 12-cylinder twin-turbo TDI engine, which is extremely quiet and economical. Scheduled to make its race début in the Sebring 12 Hours (USA) next March before contesting the gruelling twice-around-the-clock Le Mans race in France (17-18 June), the Audi R10 produces over 650 hp and a colossal 1,100 Newton metres of torque.

Audi first raced at Le Mans in 1999 and has won the annual sportscar "classic" five times in the last six years with its Audi R8 sportscar which has scored 61 wins from 77 races around the world. But Audi ventures into previously unexplored diesel-engine terrain with the V12 power plant manufactured completely from aluminium.

As with the TFSI (turbo petrol direct injection) technology, which triumphed initially at Le Mans before being adopted for mass-production, Audi customers should benefit once again from the lessons learnt in motorsport.

"With the A8 4.2 TDI quattro, Audi already builds one of the most powerful diesel cars in the world," explained Prof Dr Martin Winterkorn, Chairman of the Board of Management of AUDI AG, at the R10 presentation in Paris.

"The Le Mans project will help our technicians to extract even more from TDI technology. Nowadays, every second Audi is delivered with a TDI engine. We expect that the percentage of diesel engines will be even larger in the future."

The R10 prototype’s V12 power unit, which is equipped with two diesel particle filters, is hardly recognisable as a diesel thanks to the engine’s smooth running. The TDI engine’s specialities presented the Audi Sport engineers with many new challenges.

The injection pressure easily exceeds the 1,600 bar achieved in production cars. The usable power band lies between 3,000 and 5,000 revs per minute - an unusually low rev range for a racing engine. The driver can change gear in the R10 far less often than in the R8 because of the TDI engine’s favourable torque curve.

Radical changes to the chassis were also necessary. The Audi R10 has a significantly longer wheel base than the R8. The overly wide front tyres are, up until now, unique for a Le Mans Prototype. New technologies were also implemented during the development of the carbon-fibre monocoque. Chassis, engine and gearbox form an extremely rigid, fully stressed unit.

"The R10 project is the biggest challenge ever to have been handed to Audi Sport," said Head of Audi Motorsport Dr Wolfgang Ullrich. "TDI technology has not been pushed to its limits in motorsport yet. We are the first to confront the challenge. The demands of such a project are accordingly high. Long-term technology partners such as Bosch, Michelin and Shell support us in our quest. Together we have the chance to write new chapters in the history books of motorsport and diesel technology."

The new Audi R10 successfully completed its first test at the end of November while an extensive test programme is scheduled prior to the car’s race début at Sebring. The development team from Audi Sport is supported by Reinhold Joest’s squad which also performed this task during the R8 project.