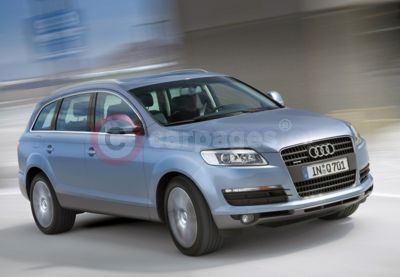 326PS and 760 Nm of torque - Audi proudly presents the most powerful diesel SUV on the world market. A state-of-the-art eight-cylinder engine with common rail fuel injection and Piezo injectors not only stands out on account of its sheer output but also demonstrates outstanding efficiency: the 4.2 TDI achieves a combined fuel economy figure of 25.4mpg.

The Audi Q7 places the concentrated power of the V8 TDI, an engine with a displacement of 4.2 litres, into a vehicle concept that impresses with its versatile sportiness. Even at its debut, the Q7 model series set new standards in its segment. Now the 4.2 TDI is moving the bar even higher.

Under the bonnet of the new Audi Q7 4.2 TDI is the most powerful diesel engine the brand has to offer. The 4.2-litre capacity of the V8, which already powers the A8 luxury saloon, generates an output of 326PS and 760 Nm of torque at engine speeds between 1,800 to 2,500 rpm. The most powerful SUV on the market has the drivability of a sports car. The Audi Q7 accelerates from standstill to 62mph in 6.4 seconds and has a top speed of 146mph. These figures are also the new best marks in its segment.

The Audi Q7 4.2 TDI transmits its power through a six-speed tiptronic gearbox and a sportily tuned quattro driveline, which in normal situations splits propulsive force 40 per cent to the front wheels and 60 per cent to the rear axle. Audi's "adaptive air suspension" is standard on this most powerful of diesels - it unites dynamic handling with the ride comfort of the luxury class.

The Audi Q7 4.2 TDI is also at the top of the tree with its standard convenience equipment. The leather design package gives the interior a noble feel.

The electric tailgate makes lighter work of loading. A new feature is the Audi lane assist system, which emits a pulse to inform the driver before he inadvertently crosses a line on the carriageway.

Like all the engines in the Audi Q7 series, the 8-cylinder diesel heralds from Audi's new V-engine family. With a displacement of 4,134 cc, the large TDI has a maintenance-free chain drive on the gearbox side for its four camshafts and ancillaries. The angle between the cylinder banks is 90 degrees, the cylinder spacing 90 millimetres, the overall length just 520 millimetres. The crankcase is made of the high-tech material vermicular graphite cast iron. This forms the basis for the light weight of the engine – just 257 kilograms.

The V8 TDI is a masterpiece of engineering. The best examples: the crankshaft is forged from chrome-molybdenum alloy steel; the cylinders are of cast aluminium. Low-friction roller cam followers actuate the 32 valves; electronically actuated flaps give the intake air into a defined swirl.

Two turbochargers with variable-geometry turbines provide solid torque even at low engine speeds while still allowing a high power output. Large charge-air coolers reduce the temperature of the compressed air. The common rail fuel injection system contains compact Piezo inline injectors that are extremely precise and fast switching. They are capable of up to five injection sequences per working cycle.

The 4.2-litre TDI develops 326PS at 3,750 rpm. Between 1,800 and 2,500 rpm it induces its impressive pulling power onto the crankshaft – 760 Nm of torque. The most powerful diesel engine in the SUV segment gives the Audi Q7 the sportiest performance of all diesels. The premium SUV sprints from 0 to 62mph in just 6.4 seconds. On the motorway it can reach a top speed of 146mph.