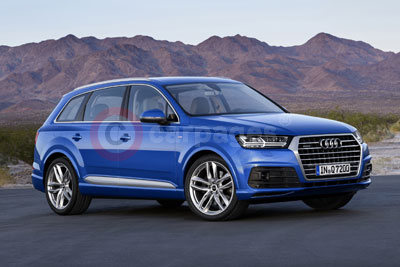 At launch the new seven-seater Q7 will be powered by one engine, a 3.0-litre272 PS V6 TDI mated to an eight-speed tiptronic transmission. On the combined cycle official figures show a figure of 47.8 mpg and emissions of 154 g/km. Performance data records 0-62 mph in 6.5 seconds and a top speed of 145 mph.

A 3.0-litre 218 PS -TDI quattro unit will join the line up later in the year and will be available to order late summer. There will be a plug-in diesel hybrid in 2016 with an electric range of 30-35 miles.

Audi have sold over half a million Q7 models since its launch in 2006 with this new model promising more even though the competition has upped the game with introduction of cars such as the new Volvo XC90.

The new Q7 sits on the new MLB 2 platform which will be used by the forthcoming Bentley Bentayga SUV and Porsche’s Cayenne. It has been visually slimmed down and smoothed out to make it blend into the environment - there have been weight savings of up to 325kg to improve efficiency and emissions. Yet the interior space has improved, with the seven seats occupied it can carry 770 litres of luggage with all the seat down bar the front two, this increases to 1,995 litres.

There will be two trim levels from launch, SE with prices starting at £50,340 and S line prices from £53,835. All models will come with a powered tailgate and powered folding rear row seats, the S having Xenon headlights and 19” alloys were the S line comes with all-weather LED lights and 20” wheels.

There will be plenty of new technology including the latest MMI navigation plus with MMI Touch comprising 8.3” retractable screen, Wi-Fi hot spot ability via 4G, there will be "Apple Car Play" and "Google Android Auto" support for smartphones later in the year. Audi will also introduce a tablet for rear passenger use in the near future.

You will also be able to opt for Audi’s virtual cockpit, which replaces the analogue dials in the binnacle with a 12.3-inch TFT display which allows the replication of normal analogue dials or digital information including maps direct in line with the driver’s eye.

This is a 6-year+ news article, from our Audi archive, which dates back to the year 2000.

If in doubt check with your local Audi dealer as car prices and technical data will have changed since 2015.