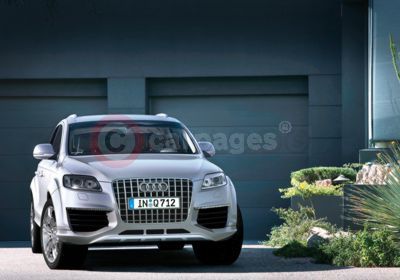 A road-going Audi Q7 SUV with a Le Mans race-bred V12 TDI engine bristling with 1,000Nm of torque takes pole position this week as the world’s most powerful diesel passenger car. Benefiting from technology honed in the development of the V12 unit that powered the Audi R10 TDI to the first ever Le Mans victory for a diesel-powered sports prototype, the 6.0-litre, 500PS engine will be available in fully fledged series production Q7 models in the foreseeable future.

The immediacy of the power flow shows in a 0-62mph sprint time of just 5.5 seconds, and the incredible performance is tempered only by the electronic limiter’s cut-in at 155mph. Yet unlike many petrol-powered V12 performance cars that at times struggle to return double-digit fuel economy figures, the Q7 V12 TDI achieves a surprisingly ‘real world’ 23.7mpg on the combined cycle, running many considerably less powerful V6 TDI SUVs remarkably close.

Two turbo chargers and a modified version of the highly sophisticated piezo common rail fuel injection system used by six and eight-cylinder Audi TDI engines play a major role in the dramatic power delivery of the Q7 V12 TDI. The adapted piezo system boosts pressure in the injectors from 1,600bar - the maximum achieved so far - to an exceptional 2,000 bar, optimising efficiency and performance. The cutting edge injection technology, in combination with a specially developed exhaust gas recirculation system and a Diesel Particulate Filter (DPF), ensures that this latest Audi powerhouse already meets EU5 targets for emissions applicable from 2010.

The new Audi V12 TDI engine family also raises the bar for refinement, even by the standards of modern day diesels, as was demonstrated during the gruelling 24-hours of Le Mans marathon race by the winning Audi R10 TDI. Aside from the obvious diesel benefits that helped the new Audi sports prototype with its 5.5-litre, 650PS V12 TDI run for longer between fuel stops than its petrol-powered challengers, one of its most noticeable distinguishing characteristics was its exceptionally quiet running. The road-going engine will follow suit, ensuring that it is a perfect fit for the Audi SUV praised widely for its limousine-like character and finish.