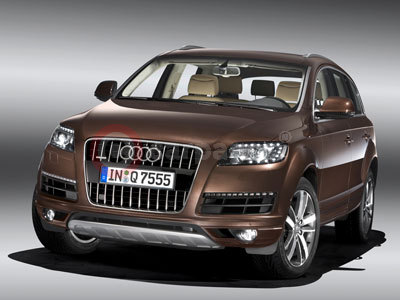 A visually and mechanically enhanced seven-seat Audi Q7 range which for the first time incorporates an ultra-low emission, EU6-compliant TDI model opens for UK order this week. Priced from £38,575 OTR, and due to reach its first customers in July 2009.

The most important advances benefiting the latest Q7 range are arguably to be found beneath the reworked body, where a new 3.0-litre TDI engine incorporating the world's cleanest diesel technology uses an AdBlue additive to eradicate virtually all harmful nitrous oxides from emissions, and already meets stringent EU6 emissions applicable from 2014.

In the Audi Q7 3.0 TDI quattro models equipped with the new TDI 'clean diesel' unit backed up by the energy recuperation technology, a combined fuel economy figure of 31.7mpg is achievable. The benefits of recuperation are also particularly evident in the 4.2 TDI, which enjoys a fuel economy boost from 25.5mpg to 28.5mpg, despite an increase in power for the latest generation unit from 326PS to 340PS. The 6.0-litre, 500PS Audi Q7 V12 TDI continues to rank as the world's most powerful diesel-powered SUV, and yet manages a wholly respectable economy figure of 25.0mpg in the combined cycle test. In the petrol camp, the 3.6 FSI V6 registers 23.3mpg, and the 4.2 FSI 22.2mpg.

Inside the latest Audi Q7, numerous detail enhancements, most notably to the instrument cluster and switchgear but also taking in lighting and interior colour schemes, have further improved the ambience. Three specification levels - standard, SE and S line - are offered for the V6 FSI and V6 TDI models, while the V8 petrol and V8 TDI versions are available exclusively in SE or S line form. The V12 TDI has an extensive, stand-alone specification. SE and S line versions in the latest generation benefit from equipment upgrades, the former including the new 19-inch alloy wheel design and Bluetooth mobile phone preparation, and the latter the addition of front seat heating, Bluetooth phone preparation and xenon headlamps with LED daytime running lights and indicators.

Among the new additions to the Audi Q7 options list is the latest HDD navigation and entertainment system available for integration into the standard Multi Media Interface. The system uses a hard drive to store navigation mapping, music and telephone data, and displays its new 3D graphics on a high resolution colour monitor. Climate controlled comfort seats capable of heating or cooling their occupants are also newly available, as are long life, virtually fade-free carbon fibre ceramic brakes, which have been fitted as standard to the Audi Q7 V12 TDI since its launch and are now offered at extra cost for 4.2 FSI and 4.2 TDI versions.