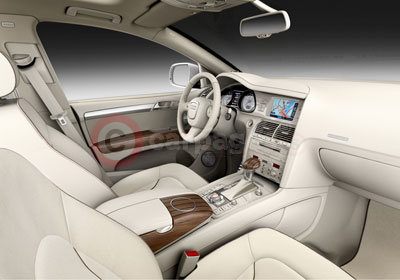 The world’s most powerful diesel-powered passenger car - the Audi Q7 V12 TDI - will use the Audi stand at the 2008 Geneva Motor Show (March 6th to 16th ) as a springboard to make the leap from one-off concept to fully fledged production model.

The world debut of the final series production version of the 500PS, 1,000Nm TDI powerhouse that was first seen undergoing testing in 2006 also coincides with the unveiling of the Q7 coastline, a new design study based on the V12 TDI which is decked out internally following a nautical theme.

The advanced engine specification, honed with the benefit of expertise gained in the development of the Le Mans-winning, V12 TDI-powered Audi R10 TDI endurance racer, is emphasized by the performance data. A 0-62mph sprint time of just 5.5 seconds and a top speed electronically limited to 155mph go hand-in-hand with a remarkably ‘real world’ combined fuel economy figure of 23.7mpg.

In keeping with the rest of the Q7 range, the latest generation quattro four-wheel-drive system with 40 / 60 front-to-rear torque split smoothly distributes the power four ways via a purpose-built six-speed tiptronic transmission, and standard adaptive air suspension refines the ride on all surfaces. The three-mode adaptive system, with electronically controlled damping and roll stabilisation and an adjustable ride height of up to 205mm, has been reconfigured for the V12 TDI with bespoke sports settings that complement the new unit.

The rate at which the Q7 V12 TDI can scrub off speed will be as impressive as its ability to generate it, thanks to standard ceramic brakes which offer significant advantages compared with conventional steel discs. They are about half the weight, are largely insusceptible to heat fading and corrosion, and have an operating life of up to 185,000 miles – four times that of steel discs.

Inside, luxurious Verano leather is the dominant feature, covering everything from the seven supportive electrically adjustable sports seats to the door and centre armrests, and is complemented by carbon fibre inlays, aluminium air vents and stainless steel pedals. It should go without saying that an exceptional standard equipment list will be part of the package.

Audi Q7 coastline takes SUV luxury to the next level

Designed with the opulence of a classic luxury yacht in mind, the Q7 coastline design study is finished externally in Inuit, a special ultra-luminous shade of white, which is set off by the single frame grille and side air intakes in dark high gloss steel. White also prevails inside, where an alabaster shade used extensively in yachting colours the majority of switches and controls, the instrument panel and cowl, the plush velvet and leather-upholstered seats and the carpet. For maximum impact the embroidered floor mats, the pillars, the roof lining, the steering wheel and the seatbelts are also colour matched in alabaster white.

The maritime theme is especially obvious in the dark waxed American walnut veneer which covers parts of the armrest, the inner door sill trims, the gear knob and, most prominently, the floor of the luggage compartment, giving it a deck-style look. Uniquely to the Q7 coastline, two neat expandable storage boxes are also incorporated in this floor.