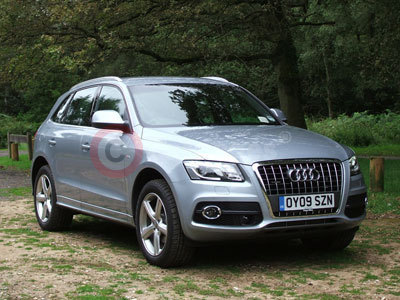 The day that Audi celebrated its 100th birthday was also the day that the Audi Q5 arrived. It is the latest SUV from the German manufacturer and younger sibling to the mighty Audi Q7.

Thankfully, the Audi Q5 bears all of the hallmarks of its big brother but isn't quite as brutish but still bullishly distinctive, nonetheless. It must be a matter of scale because the smaller Audi Q5 appears to be almost exactly the same as the Audi Q7, perhaps a little more car-like and, unless they stood side by side, the only noticeable difference is in the large front air intakes that flank the imposing trapezoidal grille, which have more rounded edges.

Smaller than the Audi Q7 it may be, but size is relative and at just over 4.6 metres in length, almost 1.9 metres wide and standing some 1.6 metres tall, the Audi Q5 is by no means small. What is more, the 2.1 metre wheelbase is said to be the longest in its class. This has been made possible by moving the differential forward of the clutch, which in real terms, means more cabin space.

The Audi Q5 also has class-leading aerodynamics and boasts a drag coefficient of just 0.33, which is surprising given the somewhat squared-off front end. However, the bonnet and body contours and design lines, along with the rake of the windscreen, allows the air to flow over and around the car and even strong side-winds don't pose too much of a problem.

Compared to the hefty Audi Q7, the Audi Q5 offers a choice of smaller engines: 2.0TDI and 3.0TDI V6 are the diesels and the petrol options are the acclaimed 3.2FSI and the 2.0TFSI.

The Audi Q5 test car housed the smaller petrol unit, which, with the help of TFSI technology, produces 211PS between 4,300- and 6,000rpm and 350Nm from as low down as 1,500 rpm and doesn't start to tail off until 4,200rpm is reached. These are diesel-like figures and as such, an advantage when towing or off-roading.

FSI stands for Fuel Stratified Ignition, which is a way of making the engine do more for less fuel; it was first developed for the Le Mans 24-hour race and now we all have the benefit of the technology. TFSI adds an exhaust turbocharger, allowing a 0-62mph time of just 7.2 seconds and a top speed of 137mph.

Audi Q5 Images may not be UK specification cars. Colours and exterior and/or interior elements may differ from actual models.