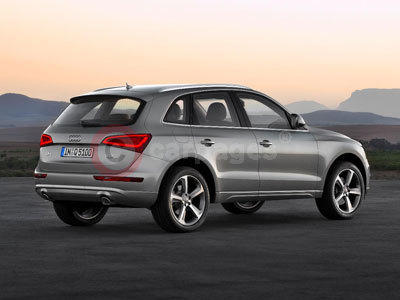 The revised Audi Q5 has been subjected to stubble styling revisions, equipment enhancement and fuel economy gains of up to 15 per cent. There will be a choice of four engines from launch, two diesels and two petrol.

The diesel line up starts with a 2.0 TDI unit that produces 177PS/380Nm and according to Audi delivers 47.1mpg on the combined cycle. The 2.0 TDI comes with a six-speed manual transmission as standard but can be selected with a seven-speed S tronic twin-clutch transmission.

The petrol units comprise 2.0 TFSI with 225PS/350Nm; fuel consumption should be around 37.2 mpg according to Audi’s figures on the combined cycle with a six-speed manual gearbox. There is the option of an eight-speed tiptronic automatic box, should you wish.

New to the Audi Q5 the supercharged V6 petrol 3.0 TFSI outputs 272PS/400Nm which will propel it from 0-62mph in 5.9 seconds and then onto a top speed of 145mph with a combined cycle fuel consumption of 33.2 mpg. The eight-speed tiptronic automatic box is standard on this engine option.

All of the four engines combine direct fuel injection with forced induction, and a start-stop system is standard in all versions.

All-wheel drive is standard with all UK cars – the quattro system under normal conditions powers the axles on a ratio of 40:60 in favour of the rear wheels but it can redistribute power when traction is lost. Not too sure how far you would want to go off-road in your Q5 – but its maximum climbing angle is 31 degrees. The vehicle’s approach and departure angles are each 25 degrees, while its ramp angle is 17 degrees. The vehicle’s ground clearance measures 20 cm.

On the outside the revisions are stubble over the predecessor - the design of the headlights has been modified, and the xenon units that are standard in S line versions and optional for all others are now framed by new-look LED daytime running lights that form a continuous band surrounding more of the lens. Adaptive lights with dynamic cornering lights and static turning lights are available as an option. When xenon plus headlights are fitted, the rears lights also incorporate visually uniform LED light bands.

The interior has been refined with new materials and fabric choices including three new interior colours – with a total of 35 different combinations offering plenty of scope for customisation.

Audi Q5 Images may not be UK specification cars. Colours and exterior and/or interior elements may differ from actual models.