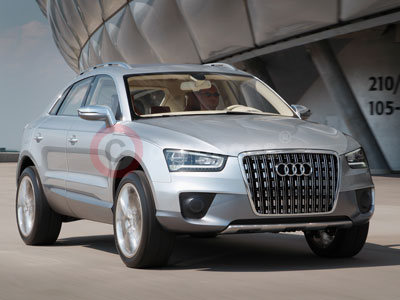 Ambitious plans to expand the Audi range portfolio to in excess of 40 models by 2015 have moved a step further this week with the announcement that the new Audi Q3 SUV is to join the line-up in 2011. The new compact SUV, which will complement the five-seat Audi Q5 and the seven-seat Audi Q7, is the latest beneficiary of the 2 Billion Euros allocated annually by Audi AG for the development of a broader range populated exclusively by innovative, cutting edge models. The broadening of the youngest range of cars in the premium sector is already well under way, the number of UK Audi models increasing from just 12 in 1999 to a total of 32 today.

With its programmes for both road and race cars the brand continues to maintain its dramatic trajectory. On the road it has extended its reach into important new segments with strong offerings such as the Audi A3 Cabriolet, A5 Cabriolet, Q5, RS 6 and R8 sports car, while at the same time bolstering its appeal to its existing customer base with core models like the all-new Audi A4. The UK is also notable as one of the largest markets in the world for the legendary Audi TT, and for the Audi A4 Cabriolet which has now given way to the Audi A5.

We have already seen five new cars due for introduction in 2009 including the new Audi A4 allroad quattro and S4 Saloon and Avant, the A5 and S5 Cabriolets, the Audi TT RS Coupe and Roadster and the Audi R8 V10. Still to come are a further three new models or replacements before the end of 2010.

Already this year, Audi has made headlines not only with news of forthcoming confirmed production models such as the Audi Q3, but also with debuts of concept studies that could form the basis for future production models. The new Audi Sportback concept put Detroit in a spin in January with a seamless blend of sports coupe desirability and five-door hatchback practicality that made it one of the undisputed stars of the 2009 North American International Automobile Show. The sleek five-door GT is the latest in a long line of Audi design studies, many of which have transferred virtually unchanged to the production line, and not only offered a glimpse of Audi's future design vocabulary, but also raised the stakes technologically with a new 47mpg-plus TDI engine featuring the world's cleanest diesel technology. This technology is already production-ready and will be a feature of the recently announced Audi Q7 3.0 TDI Clean Diesel.

The spirit of the revolutionary Audi quattro of the 1980s was also reborn in Geneva for the 21st Century in the shape of the Audi TT RS, a remarkable successor to the long-mourned classic equipped with a new high-tech, 340PS interpretation of the quattro's evocative five-cylinder turbo engine. Now available to order in the UK in Coupe and Roadster forms, the new high performance sports cars are set to reach their first customers in June 2009.

Furthermore a new version of the acclaimed Audi TT Roadster will make it a little easier for sun worshippers to weather the economic storm as they work on the all-important tan this summer. Due with its first UK customers shortly, the new Audi TT slots into the range just below the existing 2.0 TFSI model, and runs its more familiar relative impressively close both on the equipment checklist and on the move thanks to its all-new 1.8-litre TFSI petrol engine.