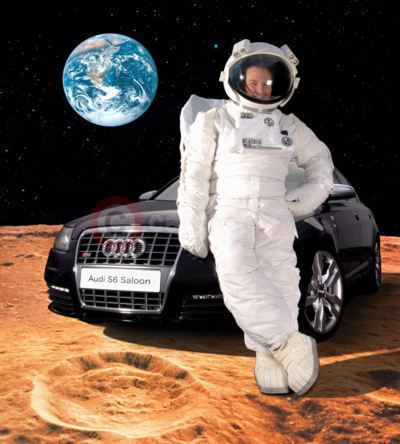 Vorsprung durch Technik brand offers competition winner the chance to blast into space at speeds of more than 1,500mph.

Vorsprung durch Technik quite literally goes galactic this week as Audi prepares to set yet another precedent by launching one lucky competition winner 62 miles up into sub-orbital space at speeds of more than 1,500mph.

Developed in conjunction with weekly science and technology magazine The New Scientist, the ‘New Scientist Space Adventure in association with Audi’ complements the A6 advertising campaign revealing that Audi has actually filed more patents than NASA. After extensive training the winner will be flown at twice the speed of sound in the rocket-powered Xerus Sub-orbital Vehicle into sub-orbital space, experiencing G-force and weightlessness and enjoying stunning views of the Blue Planet.

To be in with a chance of winning the once-in-a-lifetime space adventure, entrants must offer the most original and imaginative answer to the question: ‘What is the best patented invention of all time - and why?’  Among the most famous, and ubiquitous, patented designs are cat’s eyes, the bra, the television, sun tan lotion and even the internet.

Director of Audi UK Jeremy Hicks was delighted that this daring project has come to fruition: “This couldn’t be much better suited to us. Audi is already no stranger to pushing back the boundaries of what is possible technologically and aesthetically, so it is fitting that when the Vorsprung durch Technik brand runs a competition it doesn’t simply see the sky as the limit!” he said.

Jeremy Webb, Editor of the New Scientist, emphasised that contestants will need to employ plenty of ‘outside the box’ thinking:  “Entrants will have to be imaginative, as there will be some strong contenders - both familiar and obscure - for the accolade of best-ever patent. The first contender has got to be the telephone.  No other invention has fostered communication in the way the telephone has. Next is the humble electric light bulb. It might seem a dim idea but artificial light has made a profound impact on the world - and is still doing so. There are plenty of other ideas out there: the aeroplane, the transistor, penicillin or Velcro. And I’m dying to see a great justification for how bubble wrap changed the world!”

The current space-themed Audi campaign claims that NASA has filed 6,509 patents to date, while the German prestige manufacturer has filed 9,621 in developing the A6 Saloon and Avant. This figure - which covers everything from the humble washer to the A6's FSI direct fuel injection system and MMI control unit - highlights Audi’s commitment to Vorsprung durch Technik: progress through technology.