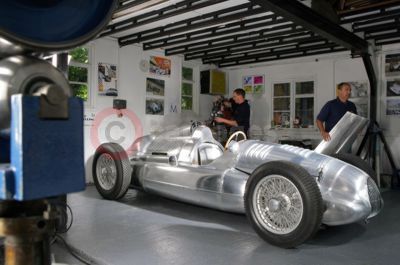 Audi will once again support the annual Goodwood Festival of Speed this summer (7-9 July) by displaying its rich heritage of motorsport through the ages.

The German prestige car manufacturer, which has supported Lord March’s two- and four-wheel motorsport extravaganza since 1998, will display and demonstrate a host of vehicles.

An ultra-rare 1939 Auto Union D-Type has been "recreated" by Roach Manufacturing and Crosswaite & Gardiner and will make its first public appearance. The D-Type’s first race with the unusual double-supercharger engine configuration was the 1939 Belgium Grand Prix while H. P. Müller won the car’s very next race (French GP).

Two other Auto Unions are also expected to come over from AUDI AG’s highly-acclaimed Museum in Ingolstadt in July.

The very original Audi quattro rallycar will be joined by a 1983 GpB Audi quattro A2 rally machine. Both ex-factory cars have been lovingly and superbly restored by Manchester-based quattro enthusiast John Hanlon.

Original "Flying Finn" Hannu Mikkola, who at the invitation of the Lord March, has given advice on revisions to the extended rallysprint course, was reunited with the original 1980 quattro at last year’s Goodwood event.

A 1988 Audi 200 quattro Trans Am machine will make a rare visit to the UK while it is also hoped that Audi’s new diesel-powered sportscar, the Audi R10 TDI, which made a historic race winning début in the Sebring 12 Hours last Saturday (18 March), will make its first UK appearance in between a hectic American Le Mans Series race schedule. Never before had a diesel-powered car won an international sportscar race.

Audi’s successful foundations in motorsport were laid in the 1930s with the amazingly powerful Auto Union "Silver Arrows" - the first rear-engined single-seaters to be raced and which are now commonplace in Formula One as we know it today.

To implement such an ambitious project like the world’s first diesel-powered sports car, able to fight for overall victory in the Le Mans 24 Hours (17-18 Jun), a high-calibre team is required.

During the past 25 years, Audi Sport has guaranteed that Audi races from victory to victory and also demonstrates "Vorsprung durch Technik" in motorsport. The Audi R10, developed in conjunction with trusted and proven partners, has been completely developed by Audi Sport.

Every project previously undertaken by Audi Sport has been rewarded with a victory or championship title. For Audi, its motorsport programme is more than a marketing instrument. The AUDI AG motorsport successes have always been linked with ground-breaking developments - later adopted in to Audi’s roadcars.

The best examples of these have been quattro, permanent four-wheel-drive, which celebrated its 25th anniversary in 2005 and revolutionised rallying in the 1980s. Meanwhile Direct petrol injection (FSI) technology, giving excellent accelerator response and excellent fuel economy, was used at Le Mans since 2001 and remains unbeaten in the French long-distance race.