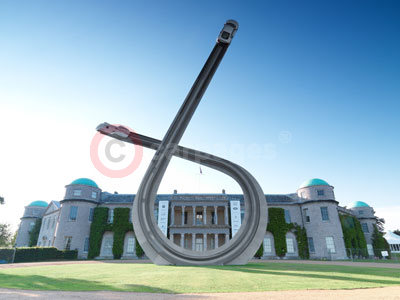 The Audi Monument At The Goodwood Festival Of Speed

Every year since 1997, Lord March has surprised us all with ever more vast and spectacular centrepieces for the Festival of Speed at his home, Goodwood House in West Sussex. For 2009 the latest sculptural 'monument' will be unveiled for the start of the three day Festival (3rd to 5th July 2009), which is likely to entertain a record number of 130,000 visitors for this year.

The Festival's work of art is the focus of Audi's global centenary celebrations - a truly breathtaking 35 metre high automotive 'monument'. The Audi 'central feature' art installation is one of the most ambitious and stunning sculptures ever constructed for Lord March's unique and world leading annual Festival, representing the unique style of one of the world's most progressive automotive brands.

The jaw-dropping 2009 Festival of Speed Central Feature actually marks the second occasion that Audi has chosen to celebrate a significant anniversary at Goodwood. In 1999, Audi was honoured with one of the most striking and memorable Goodwood central features to date for its 90th anniversary. The famous Avus race track banking was recalled in an astonishing installation that also included the iconic Auto Union Streamliner and a stunning Audi Avus quattro concept car perched high on the banking.

Designed by the award-winning Gerry Judah, Lord March's evergreen creative collaborator, the sculpture features two Audi cars - the legendary 1937 Auto Union streamliner as well as the just launched R8 V10 sports car suspended in the air, at either end of a dramatic 'swoosh' of tyre tracks, as if they are driving off into the sky. The sculpture is the latest in a grand tradition of central displays at the Festival. Each year Judah honours the featured marque with its own central display but this year's is something very special.

"I wanted to design something iconic because this year is Audi's 100th anniversary," explains Judah. "The sculpture had to have a celebratory theme and it also had to encompass the qualities of the Audi brand: sporty, prestigious and progressive.

"I drew about 20 ideas and some had elaborate bridges with vaulted arches but somehow they didn't have quite the right style. I then had a flash of inspiration and designed this 'swoosh' with a car at either end to represent Audi's 100-year history.

"It's made entirely of steel and although the design looks simple, it's actually extremely complex, because the structure has to be rigid and completely balanced without the need for hundreds of supporting props."

The total weight of the structure is 40 tonnes - the equivalent of 40 small family cars. It took two 100 tonne cranes to erect the structure and four weeks for 12 men to fabricate, build and install the structure.

As well as the Audi sculpture, the Festival will showcase Audi's most important cars and drivers from its illustrious century - from the days of the Grand Prix Auto Union 'Silver Arrows' of the thirties, through the 'quattro years' of the Eighties, right up to the present day.

Ten years on from its Goodwood debut, the Audi marque has progressed to become an even more significant player in the global premium car market, combining an enviable image for innovation and quality, and exhibiting consistent worldwide sales growth breaking the million global the widest and most comprehensive product programmes in the premium car sector, ranging from the hugely successful Audi A3, right through to the pioneering Audi R8, and including the Audi Q7 V12TDI, with an engine directly developed from Audi's all-conquering turbo diesel sales barrier last year.

The Festival is famously held on the hill climb course and the grounds of Goodwood House on Lord March's 12,000-acre West Sussex estate.