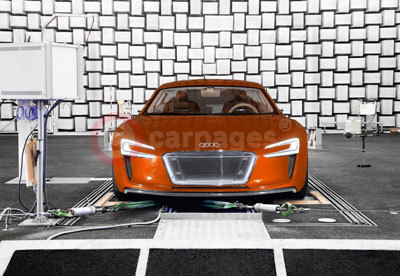 Audi electromobility experts are drawing inspiration from -fictional cars such as the Audi RSQ used in the film -I, ROBOT to devise an -engine note for the brand's near-silent e-tron electric cars.

Acousticians decide how the e-tron electric cars of 2012 and beyond will make themselves heard.

Audi ‘acousticians’ are deliberating over the best way to break the silence of the brand’s forthcoming ‘e-tron’ electric cars, which make virtually no sound at speeds of up to 15mph, to alert other road users to their presence. Drawing inspiration from numerous sources, including science fiction blockbusters such as ‘I, ROBOT’, which features the Audi RSQ electric coupe, electromobility experts hope to create an ‘engine note’ that reflects the futuristic nature of these cars while also upholding the premium brand values synonymous with Vorsprung durch Technik.

The risk to other road users of cars cruising the streets in near silence is obvious. There is only one logical conclusion for the sound technicians at Audi: The electric car of the future needs its own sound – but which one?

“We speak of quiet cars when an electric car is driven at a speed between 0 –15mph,” explains Dr. Ralf Kunkel, Head of Acoustics at AUDI AG. Noise from the rolling of the tyres and from the slipstream comes to the fore above this speed, at which point an electric car is no longer significantly more quiet than a conventional vehicle.

The fact that this new form of transportation is particularly quiet is, of course, another factor of its success, as environmentally-friendly cars should not only reduce emissions, but also noise pollution. However, speed without the typical road noises that serve as a signal carries risks: The sense of hearing allows other road-users in traffic to monitor all 360 degrees of their surroundings, whereas their eyes only cover a limited angle. People with poorer vision or who are distracted can easily overlook a car.

Organisations for the blind worldwide therefore advocate giving quiet cars a unique sound; specifications or laws to this effect are already in place in the USA and Japan.

The sound technicians at Audi have long since taken up the task of protecting pedestrians in the electric mobility era. “One way do this is by generating artificial noise in electric cars,” says Kunkel.

The acousticians are currently hard at work on the sound characteristics of the Audi e-tron. It is not just a matter of safety, but also a question of how the Audi of the future should sound. “The obvious approach would be to work on the basis of the familiar sound of a combustion engine,” says Christian Schüller, Head of Brand Development/Corporate Identity. “On the other hand, we want to underscore that an electric or hybrid Audi is an innovative product. We also want to make our Vorsprung durch Technik audible in the era of electric mobility.”

The rustling of leaves, the twittering of birds or shrill tones such as those used by Snow Cat extreme terrain vehicles are therefore not viable options. However: “The sounds used for space ships in films are reminiscent of car sounds, yet are also very different, making this a rather interesting approach,” says Kunkel. An Audi will not sound like an aeroplane with jet engines or a space ship from a science fiction film any time soon, though. “But the sound will be new and unusual. The Audi RSQ from the 2004 Hollywood film ‘I, Robot’, starring Will Smith, gives an indication of how an Audi might sound in the future.”