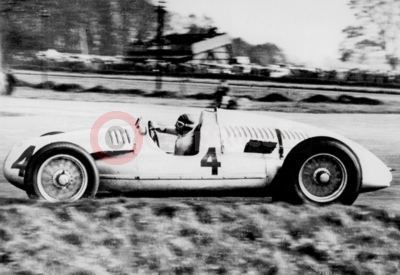 What could become the most expensive car ever to be sold in the history of the prestigious auction house Christie's is due to go under the hammer at the international vintage car fair Rétromobile in Paris later this month (February 17th).

Christie’s has estimated the value of the 1939 Auto Union D-Type, one of just two remaining examples of this legendary Grand Prix racing car, at between £5.78-7.88 million, which would set a new record. Formed in the Thirties through the amalgamation of four German automotive marques, Auto Union was a precursor to the modern day Audi brand, and its memory is kept alive by the German prestige manufacturer’s heritage division, Audi Tradition.

The auction vehicle will be on display in the Audi Forum New York (250 Park Avenue and 47th) on 25 January, and its so-called "sister" car - the Auto Union D-Type racing car from 1938 - makes an appearance on 12 February in Paris (Bauer Saint Honoré, 48 Place du Marché Saint Honoré). Both of these Grand Prix cars made the journey from the former Soviet Union, having been transported there from the factory Zwickau in eastern Germany after World War II by the Soviet occupation forces as spoils of war.

American Paul Karassik eventually brought them to the West in the 1980s after searching for them for over 10 years and eventually finding them stripped down into individual parts in the former USSR. He then had them reassembled by East Sussex-based car restoration experts Crosthwaite & Gardiner, with technical support from AUDI AG. Subsequently AUDI AG acquired the 1938 car from Paul Karassik. The 1939 D-Type passed into private ownership.

The car was modified in 1939 with the addition of a twin compressor, which increased its engine power output from 420 to 460PS. Its top speed was 205mph and it was driven to victory at the Grand Prix in France and Yugoslavia. The top drivers of the Auto Union Type D racing car were Tazio Nuvolari, H.P. Müller, Hans Stuck, Rudolf Hasse and Georg Meier.

The four rings of the Audi badge symbolise the brands Audi, DKW, Horch and Wanderer, which were later combined under the umbrella of Auto Union. Auto Union and NSU, which merged in 1969, made many significant contributions towards the development of the car. AUDI AG was formed from Audi NSU Auto Union AG in 1985. Together with the two traditional companies Auto Union GmbH and NSU GmbH, Audi Tradition nurtures and presents the deep and diverse history of Audi. The Audi museum mobile at the Audi Forum Ingolstadt is open from 9am to 6pm.