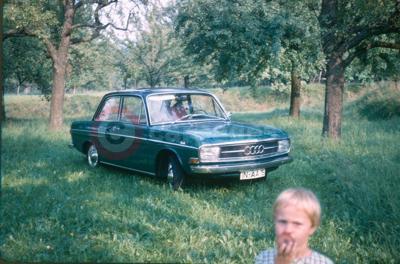 Audi succeeded in making a new start 40 years ago with the launch of the Audi 72. This was a very significant event in the company history of AUDI AG, as it proved to be the rebirth of the Audi brand. In autumn 1965 the Ingolstadt car company, still called Auto Union GmbH in those days, introduced a new model with a four-stroke engine for the first time after the war at the Frankfurt Motor Show. This new car needed a new name, and thus the name “Audi” came into being. Founded in 1909 by August Horch, Audi had become noted for the manufacture of elegant six and eight-cylinder cars in the 1920s and 1930s. From 1932 onwards, together with DKW, Horch and Wanderer, the Audi brand formed part of the merger Auto Union AG, which was symbolised by the emblem of the four rings.

In the middle of the 1960s the German car manufacturing industry was in a state of upheaval and Auto Union GmbH in Ingolstadt was experiencing a crisis with its DKW two-stroke cars. Daimler-Benz AG, the major shareholder in Auto Union from 1958 to 1964, developed a four-cylinder four-stroke engine for its ailing subsidiary. In autumn 1964, Volkswagenwerk AG took over the Ingolstadt company, and the work at hand was completed under the supervision of VW. Chief technician Ludwig Kraus installed the water-cooled inline 4-cylinder engine with a capacity of 1695 cc, 72 bhp output and the unusually high compression ratio of 11.2:1 in the body of the last DKW model, the F 102. At the outset, the first Audi did not bear any model designation; later it was called the Audi 72 reflecting its engine output.

Automotive journalists praised the new Audi for being a practical and well-finished car, with a reliable engine and the best in driving characteristics. The four-cylinder four-stroke engine became the basis of all further models in the Audi range. With the introduction of various model versions, the model designation “Audi” was supplemented by the relevant number of horsepower. In 1966 the Audi 80 and the Audi Super 90 appeared in the same guise. Two years later the Audi 60 and Audi 75 models were included in the range. The new Audi 100 was officially introduced in 1968 and paved the way into the top end of the midsize class. From then on the future belonged to the Audi brand.

In 1969 Auto Union GmbH, Ingolstadt merged with NSU Motorenwerke AG, Neckarsulm. The new Audi NSU Auto Union AG with head office in Neckarsulm came into being. The company name, which was unusually long and difficult to remember, became a matter of debate at the beginning of the 1980s; this was due to the fact that NSU ceased to be used as a product name after the NSU RO 80 went out of production in 1977. The Board of Management decided to rename the company AUDI AG, which took effect from 1 January 1985. From then on both the company and its products have borne the same short and succinct name. In view of the change of name, the head office moved from Neckarsulm to Ingolstadt.

However, the traditional name elements NSU and Auto Union no longer appeared as part of the company’s new name. Therefore, in order to legally protect these names, two subsidiaries were founded in 1985; Auto Union GmbH in Ingolstadt and NSU GmbH in Neckarsulm. Since then the primary tasks of these two entities has been the upholding of the company's tradition, the creation of a collection of historic vehicles and the collation of archive material relevant to the history of the company. Both of these tradition-upholding companies have been integrated in the department Audi Tradition since 1998.