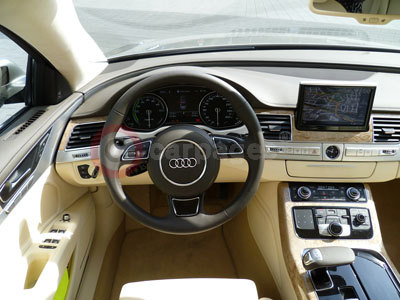 An Audi A8 is a limousine with a high level of refinement and a hushed interior. This one is no exception, but the sound it makes is a bit different from other versions of Audi’s flagship model. It is a luxury limo that doesn’t sound quite as up-market as it looks. Three-litre V6 diesel versions of the A8 have a muted rich baritone sound as discreet aural wallpaper. This one sounds rather puny but also a bit coarse.

Not too much noise permeates the cabin, though. Audi’s engineers have equipped it with active noise cancellation that works like those special headphones seasoned travellers wear on long-haul flights to cut out the engine drone. The A8 Hybrid has four microphones hidden in the ceiling to deliver a sanitising sound that counteracts less agreeable noise frequencies.

This is a big, well-cushioned car with acres of space inside its high-tech, mostly aluminium space-frame body, and ample room to stretch out in all the seats. The A8 Hybrid has an opulent feel inside, with a high level of comfort and seats clad in high quality leather.

Although there is no Euro NCAP rating for this car, it is built to five star standard and has safety and security provision befitting a high-class limousine. There is a full array of electronic safety aids to assist the driver, and security measures include remote central locking, immobliser and alarm.

A Bose audio system, famed for sound quality, is standard kit in this car. This is a top notch Audi model, and its equipment levels are high. The car comes with a lavish array of technical aids to assist the driver in all conditions. Upper-crust cars boast of having two separate climate control zones, but this one has three, to let the driver, front passenger and back seat occupants all dial in their individual preferences.

Other standard kit includes distinctive ribbons of LED running lights and 19-inch alloy wheels that are special to this model, all designed to distinguish the A8 Hybrid from other versions of the A8.

Hybrid cars used to be the sole preserve of Japanese manufacturers, but times are changing fast and hybrid technology is expanding rapidly amongst other car makers. Now it is even available at limousine level, and Audi has made a very fine job of its A8 Hybrid. There is little to distinguish it visually from other A8s, but anyone interested in helping the environment should welcome the arrival of this greener A8, with a CO2 output lower than any other version.

This is a 8-year+ news article, from our Audi archive, which dates back to the year 2000.