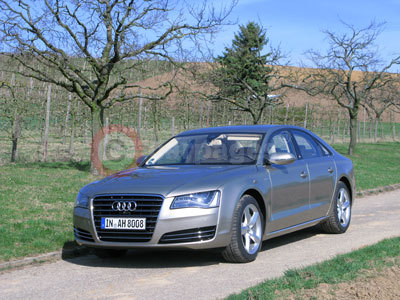 Electric cars are all the rage, but until someone invents a new kind of battery that will last for longer than commuter distance before running out, a hybrid is a better green option. So hybrids are becoming ever more numerous on the car scene, and they are not just practical family models. Hybrid technology has been moving further up-scale in the car market, and here is a luxury model with two power sources: a petrol engine and an electric motor with a lithium ion battery pack. Audi’s A8 limousine has gone hybrid.

The kind of engine normally associated with a big luxury car like an A8 is at least a three-litre V6. So it seems a bit surprising to find a more modest two-litre, four-cylinder engine under this particular A8’s long, wide bonnet. But it is supplemented by an electric motor that boosts the overall power output by a quarter. So the combined result of this dual power arrangement is a greener A8 with very reasonable performance.

The main advantage of this version of the A8 is economic. The Hybrid will cost less than the rest of the A8 range in running costs and on company car taxation. There is also the satisfaction of driving a more environmentally friendly model than other flagship Audis, although it is still a very a big vehicle for these green-minded times. The A8 Hybrid will be offered in both standard and long-wheelbase versions.

The 1,984 cc turbocharged petrol engine that is the A8 Hybrid’s primary power source produces 208 bhp, sustained from 4,300 to 6,000 rpm. Added to that is another 53 bhp coming from the secondary power source, the electric motor. They combine to give the car its overall power output of 241 bhp.

Maximum engine torque is 258 lb ft at 1,500 to 4,200 rpm, plus another 155 lb ft from the electric motor, resulting in a combined 354 lb ft of torque. That makes this a powerful car, as the performance figures testify.

An acceleration time from 0-62 mph of 7.7 seconds, and a top speed of 146 mph, confirm that this version of the A8 is up there with the rest of the pack. It is not quite as rapid as an A8 three-litre TDI though, which is around one and a half seconds quicker off the mark. Nor is the Hybrid quite as smooth on the accelerator as a standard petrol or diesel A8.

When you switch on and the car pulls away in electric mode it is remarkably smooth and quiet. Dashboard displays show how much charge remains in the battery and the amount of energy being put back into the system from regenerative braking. While driving in electric mode, intended for only a short distance – just under two miles - the car’s top speed is limited to 62 mph. After its brief run on electric power, the car’s petrol engine cuts in automatically.