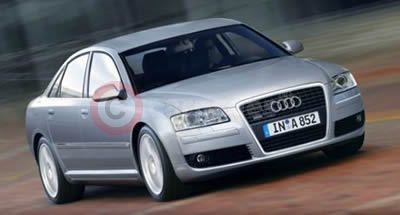 From next month the boundary between diesel car and super car will become considerably more blurred as a new Audi A8 TDI luxury saloon claims the title of the world’s most powerful production diesel. The new 326PS Audi A8 4.2 V8 TDI quattro will be available in standard and long wheel base body styles costing £58,605 OTR and £61,975 OTR respectively, and will set a new benchmark for TDI performance while actually also reducing fuel consumption compared with its predecessor.

15kg lighter than the 4.0-litre eight-cylinder TDI it replaces, the compact new 4.2-litre unit is the first Audi V8 TDI engine to incorporate the latest common rail fuel injection system with state-of-the-art Piezo injectors. The precisely metered fuel delivery that Piezo technology makes possible ensures that the new twin-turbocharged and twin-intercooled engine not only provides more power and even stronger performance than the 4.0 TDI, but also holds a fuel economy advantage.

A body shell that is over 40 per cent lighter than the norm thanks to aluminium construction around the aluminium Audi Space Frame (ASF) allows full exploitation of the exceptional output. Rapid-fire gear-changes from the six-speed tiptronic automatic transmission, and secure all-weather power delivery via the quattro four-wheel-drive system, also help the A8 4.2 TDI quattro to power to 62mph from rest in just 5.9 seconds, and to ride a wave of torque right up to an electronically governed 155mph.

Despite the major power and performance gains, the combined fuel economy figure for the new A8 4.2 TDI quattro actually shows a slight improvement over its predecessor at 30.0mpg (A8 4.0 TDI 29.4mpg), thanks in part to the advanced Piezo technology. This equates to a potential range of up to 590 miles on a single tank of diesel.

Featuring a separate high-pressure pump and rail for each row of four cylinders, the Piezo system permits up to five separate amounts of fuel to be injected on each working stroke at an injection pressure of 1600 bar, 250 bar more than with previous common rail systems. This helps to achieve the best possible fuel/air mixture and an even more efficient combustion process.

Environmental impact is also minimised by a diesel particulate filter, which is fitted as standard and works in conjunction with the twin catalytic converters to maximise exhaust gas cleansing. The system needs no additives, and so will need no servicing throughout the lifespan of the car.

In common with the rest of the range, the new A8 4.2 TDI quattro will feature the latest Audi corporate look characterised by the distinctive single frame grille. It will offer adaptive air suspension for optimum ride comfort, controlled via the acclaimed Multi Media Interface (MMI) in-car control system. An upgraded SE equipment specification has also recently become a standard feature of V6 and V8 models, and there is now the option to add a new Sport pack available at extra cost.