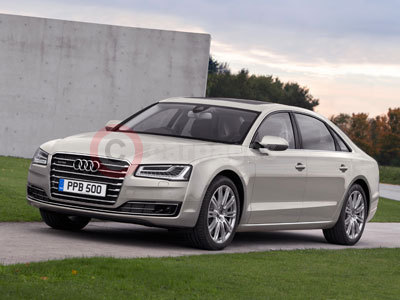 The new Audi A8 is available to order priced from £58,800 with the first deliveries expected January 2014.

The new Audi promises a weight reduction to its predominantly aluminium Audi Space Frame (ASF) body with a raft of technological advances including new MatrixBeam LED headlights and an upgraded line-up of EU6-compliant engines.

There has been subtle re-sculpturing of the body with a new single frame grille, the bumper and the lower edge of the headlight has sharpened with the rear featuring redesigned LED tail lamps and the bumper in all models bar the S8 incorporating two rhomboid tail pipes. New chrome elements, new high gloss black window surrounds and five new colours make the new Audi A8.

The new Audi A8 can be equipped with MatrixBeam LED Headlights which comprise 25 individual LEDs per headlight that can be switched on and off or dimmed individually depending on the situation. This cleverly enables the headlight system to react to other vehicles, whilst always brightly illuminating the road. When the on-board camera detects other vehicles ahead, the Audi MatrixBeam LED headlights mask the relevant sections of the high-beam by dimming or shutting off individual diodes whilst retaining full illumination in the remaining zones.

The lighting system in the A8 uses predictive route data from the navigation system with MMI Touch to adjust the distribution of light in response to the current driving situation, and can recognise and act on route data, such as corners and road classifications.

The system also incorporates intelligent cornering lights, new-look daytime running lights and dynamic indicator lights, the latter comprising blocks of LEDs arranged in a strip which are sequentially illuminated at 20 millisecond intervals, from the inside outwards, in the desired turning direction. This 'sweeping function' makes it even clearer to surrounding road users that the A8 is about to turn.

There is a choice of seven petrol and diesel engines, all EU6 compliant and mated to an eight-speed tiptronic gearbox. There have been a number of revisions to the engines, including the supercharged 3.0 TFSI petrol engine which is now boosted to 310PS from 290PS. The V8 twin-turbo 4.0 TFSI moves from 420PS to 435PS and now incorporates fuel-sparing Cylinder on Demand technology. The 3.0 TDI unit increases from 250PS to 258PS and the 4.2 TDI gains 35PS, taking it to 385PS with torque up by 50Nm to 850 Nm.

The Audi A8 L W12 quattro is powered by a 6.3-litre 500PS petrol engine with a new bespoke version of the cylinder-on-demand system technology which when not under load deactivates the fuel injection and ignition for six cylinders. This equates to a combined fuel consumption of 24.1 mp and CO2 emissions of 270 g/km.

The Hybrid a 2.0 TFSI engine and electric motor to produce a system output of 245PS and system torque of 480 Nm. It run on electric power for up to 1.9 miles and can reach speeds of up to 62 mph. CO2 emissions are 144 g/km and on the combined cycle 44.8 mpg is possible.

There is a choice of three specification levels - ‘SE’, ‘SE Executive’ and ‘Sport Executive’