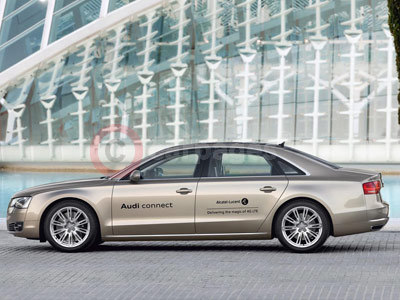 Audi has unveiled an even more technologically-advanced edition of the long wheelbase Audi A8 luxury saloon, which has been engineered to feature broadband internet with long-term evolution (LTE) technology. LTE technology offers data transfer speeds of up to 100Mbps, which is similar to a fixed-line broadband connection. This means passengers in the prototype can use the LTE broadband connection to stream music, high-definition videos and other data on up to six computer or mobile phone devices with ease. Current 3G connections can only offer data transfer speeds of around 14.4Mbps.

Developed in collaboration with communications pioneer Alcatel-Lucent, the car's mobile broadband connection is a fourth generation ('4G') technology that is hotly-tipped to replace the Global System for Mobile communications (GSM) and the Universal Mobile Telecommunications Standard (UMTS) systems that underpin 3G. LTE allows data to be transferred faster than conventional 3G-technology and modern digital subscriber line (DSL) connections - wired landline broadband. LTE can also cope with large numbers of users streaming data, even at peak times, because of its extra bandwidth.

"We will use LTE technology to extend our advantage in automotive networking and further consolidate the Audi connect strategy," explained Michael Dick, Audi Board Member for Technical Development, during the presentation of the Audi A8 L prototype.

Rupert Stadler, Chairman of the Board of Management of AUDI AG, announced that LTE technology would be used in cars by early 2011 at the Consumer Electronics Show in Las Vegas last year. Just eight weeks into the year, Audi and Alcatel-Lucent have revealed a fully-functioning prototype.

With its quick connection speeds, LTE technology offers more dynamic and reliable internet access, particularly when large amounts of data need to be uploaded or downloaded. Audi technicians have tested the capabilities of LTE by streaming high-definition videos - which have notoriously large data streams - live to the prototype.