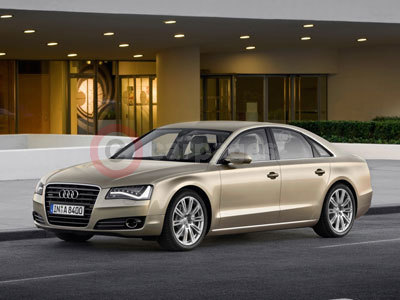 The last word in luxury and the height of efficiency converge in the all-new Audi A8, which makes its world public debut at the Design Miami exhibition in Florida, USA. Crafted entirely from lightweight aluminium like its forebears, and bristling with new technology that not only contributes to best-in-class economy and exemplary comfort but also to even greater dynamic accomplishment, the elegant new flagship of the Audi saloon range opens for UK order this month priced from £54,760 OTR.

The upgraded 4.2-litre FSI benefits from a 13 per cent improvement in fuel economy, taking its combined figure to 29.7mpg and dropping CO2 output to 219g/km. The equivalent V8 TDI gets a 19 per cent boost to 37.2mpg with CO2 emissions down to 199g/km, while the 3.0-litre TDI moves to the top of the luxury saloon class in economy terms with a 22 per cent economy hike to 42.8mpg with CO2 of 174g/km.

During 2010, an even more economy and emissions-focused version of the 3.0-litre TDI unit will be added. Driving the front wheels only, it will combine a 204PS power peak with 47.1mpg economy on the combined cycle and CO2 emissions of just 159g/km.

All engines are complemented by recuperation technology which provides further fuel and CO2 savings by recycling a proportion of the wasted kinetic energy which is generated under normal braking and normally dissipated as heat, and storing this temporarily in the vehicle battery to reduce the engine load when the car subsequently accelerates again. The Audi A8 3.0 TDI also saves fuel through its engine start-stop function, cutting engine power at idle when the brake pedal is depressed, and then restarting in just two-tenths of a second when it is released.

The much improved efficiency of these enhanced engines is matched by the new eight-speed tiptronic automatic transmission with which all of them work. With an especially high overall gear ratio of 7.0:1, it reduces overall fuel consumption by around six per cent, but is equally notable for its quick and virtually seamless changes.

Two specification levels will be available to UK Audi A8 customers - SE and SE Executive - the latter adding to this equipment list features such as electrically operated boot closing, the Audi Parking System Advanced with rear parking camera and larger 19-inch wheels in place of the 18-inch design fitted to SE models.

To create an even more exceptional looking Audi A8, customers will be able to specify all-LED headlights in place of the standard Xenon set-up, and for even greater opulence five-mode seats with ventilation and massage function, a rear seat entertainment package and a 1,400-watt Bang & Olufsen audio system.