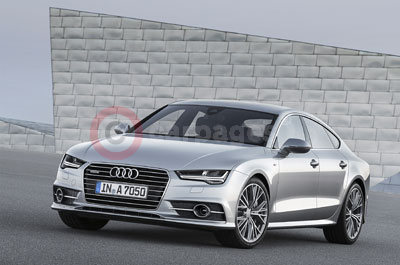 The Audi A7 Sportback has undergone some minor exterior tweaks, new engine and transmission options and an upgraded infotainment system. -Prices will be released near the launch date, towards the end of 2014.

The A7’s exterior now features a single frame grille, which adopts the latest hexagonal design, to the bumpers, which have been subtly re-sculpted, and to the tailpipes, which now have wider, trapezoidal apertures. LED headlamps are now combined with LED daytime running lights as standard, and can be upgraded to Matrix LED headlights.

There are new interior materials, including aluminium/Beaufort walnut inlays. The colour palette has been revised, and now offers additional colour options now extending to include the Valcona leather upholstery available as an upgrade to the standard Milano leather in versions below the S line. In S line versions, which previously featured Valcona leather exclusively in black as standard, a Lunar silver option is also now offered.

At launch the A7 Sportback will be available with a choice of five power plants, two petrol (TFSI) and three diesel units (TDI), ranging in power from 218PS to 333PS - all Euro EU6 emission compliant.

The newly developed V6 3.0 TDI clean diesel, which in its “ultra” guise outputs 218PS with front - wheel drive, is capable of return 60.1mpg with CO2 emissions of 122 g/km on the combined cycle (NEDC figures). The Audi S7 Sportback will feature a 4.0-litre TFSI outputting 450PS.

The 3.0 TDI biturbo, which delivers 320PS is mated to an eight-speed tiptronic transmission; all other engines configurations feature a seven-speed S tronic transmission. In the versions with front-wheel drive, the dual-clutch unit replaces the eight-speed multitronic CVT transmission. For engine outputs of 272PS and above, quattro permanent all-wheel drive can be supplemented with the sport differential, which actively distributes power between the rear wheels.

The A7 Sportback will feature Audi’s new generation infotainment system, which is built around the Multi Media Interface.  Its uses a new graphics processor from Nvidia and includes MMI touch, enabling the driver to scroll and zoom in lists and maps via a touchpad. You can opt for MMI Navigation plus and Audi connect which allows -internet access -via a 4G modem. The Audi phone box option is also now available - it enables occupants to connect their mobile phones to the car‘s antenna for improved reception simply by placing them in the phone box compartment.

This is a 7-year+ news article, from our Audi archive, which dates back to the year 2000.

If in doubt check with your local Audi dealer as car prices and technical data will have changed since 2014.

Audi A7 Images may not be UK specification cars. Colours and exterior and/or interior elements may differ from actual models.