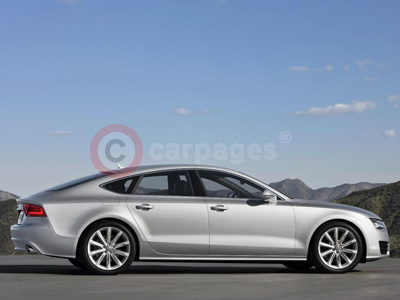 All New Audi A7

The sought-after Audi Sportback formula can now be enjoyed on an even grander scale in the all new Audi A7 Sportback, which in a similar vein to its Audi A5 namesake discreetly integrates saloon car versatility and hatchback practicality into an elegant premium coupe silhouette. By reinterpreting the concept for the larger executive class, the Audi A7 Sportback will project the Vorsprung durch Technik brand into yet another new segment when it joins the UK range as its 35th member in January 2011, priced from £42,925.

As befits its positioning as an unashamedly luxurious yet also distinctly driver-oriented five-door performance coupe, the new Audi A7 Sportback will initially offer a choice of four FSI petrol and TDI engines delivering exhilarating pulling power with limousine-like polish. The naturally aspirated 204PS 2.8-litre FSI and supercharged 300PS 3.0-litre TFSI petrol units will be complemented by two versions of the acclaimed 3.0-litre TDI in 204PS and 245PS forms.

For the first time in Audi models at this level, these will be combined with the rapid-shifting seven-speed S tronic twin-clutch sports transmission wherever quattro four-wheel-drive is installed. The quattro all-wheel-drive system appears in latest generation form with 40%:60% rear bias and featuring the crown gear differential first seen in the RS 5, which can vary torque distribution between the front and rear axles even more widely for even greater agility.

Drivers with a greater bias towards economy and long distance comfort will also be well catered for by the Audi A7 Sportback. The latest direct injection technology puts its engine range at the forefront of efficiency, and all four units also combine innovative Audi thermal management, energy recuperation during coasting and braking and the now familiar engine start-stop function.

With the added benefit of new engine load-reducing electromechanical power steering, and the fuel-sparing, torque converter-free Audi multitronic continuously variable automatic transmission fitted as standard to front-wheel-drive versions, fuel economy of up to 53.3mpg, and CO2 of as little as 139g/km is possible if the 3.0 TDI (204PS) is specified.

Two specification levels - SE and S line - will be offered in the UK, and an impressive 'core' equipment list will be common to both. This will include xenon headlamps with LED tail lamps, powered tailgate operation, leather upholstery, electric seat adjustment and heating, cruise and parking controls, satellite navigation, the Audi Music Interface (AMI), DAB digital radio and Bluetooth phone preparation.

The 'hub' of the interior is the advanced Multi Media Interface (MMI) system with retractable 6.5-inch monitor, which with its large central control knob and reduced number of buttons is now even more intuitive to use when operating the standard high end audio and navigation systems and the Bluetooth phone interface.

MMI will be upgradeable at extra cost to MMI Touch with its 8-inch monitor and fingertip sensitive touch pad as seen first in the new Audi A8. As well as ultra-intelligent 3D navigation mapping, the new MMI Touch system can store audio tracks and telephone data on its sizeable hard disk. To enter a destination or phone number, the driver need only draw the required letters or numbers with their index finger on the touch pad.

For the first time in a production Audi, a 'head-up' display will be available at extra cost in the Audi A7 Sportback. The sophisticated system will project key information, including economy and speed data and navigation routing onto the windscreen so that it appears to float at a distance of around 2.5 metres ahead of the driver.

Audi A7 Images may not be UK specification cars. Colours and exterior and/or interior elements may differ from actual models.