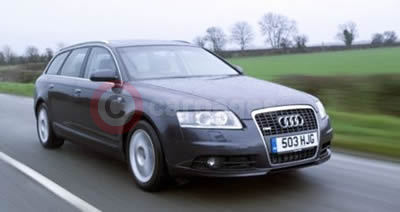 At the press reveal of the new Audi A6 Avant (estate car) range prior to it going on sale in the UK this month, Audi revealed a whole host of figures to support the growth of their brand in the UK.

Last year in the UK Audi sold 77,982 new cars, an increase of 8.78 per cent over 2003. This growth was almost the same as their German rival BMW but well ahead of the 12.46 per cent decline by Mercedes-Benz.

Jon Zammett, Head of PR for Audi in the UK said, "So far in 2005 and for the first time ever, Audi has outsold BMW in the first quarter of any year in the UK. So far this year our UK sales are 25,497, up 13.31 per cent. BMW sales are 24,512, down 4.4 per cent and Mercedes first quarter UK sales at 19,143 showed a 22 per cent decline". The UK is Audi’s second biggest export market, a whisker behind the USA. Audi also has the youngest customer profile of any premium brand in the UK.

Audi UK’s figures show their customer retention has increased by 10 per cent over the last ten years, Mercedes fell by 10 per cent and BMW saw an increase of 5 per cent.

In the first quarter of this year Audi’s world sales were up by 1.8 per cent to a new record level of 195,044 and European sales increased by 9.8 per cent.

2005 is the 25th anniversary of Audi launching the Quattro four-wheel drive system for road going passenger cars pioneering the technology now used by many manufacturers. A third of all Audi models sold in the UK are Quattro variants.

In a full year Audi UK expects to sell 11,000 A6 models of all types, 50 per cent of them will be the new A6 Avant. In line with the brand overall, Quattro Avant models will take one third of sales, the SE specification is expected to account for 75 per cent of sales and 60 per cent of customers will go for one of the two automatic transmission options, tiptronic or multitronic CVT types. 75 per cent of A6 Avant sales will be for diesel engine models.