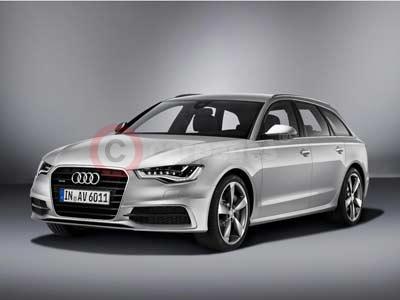 All New Audi A6 Avant

The all new Audi A6 Avant will make its world debut in Berlin this week, ahead of the first UK order in June with first deliveries in November 2011.

With prices starting from £32,100 the new Audi A6 Avant will feature new technologies and construction processes helping to deliver efficiency improvements and increased capacity of up to 1680 litres. Later in 2011, a new 313PS twin-turbo V6 RDI engine will be available, shared with the Audi A6 saloon.

The new 3.0 litre twin-turbo TDI, available later in 2011, will be the most potent V6 and fourth diesel-powered option in the range. A two-stage turbocharger delivers a maximum boost pressure of up to 3.2 bar and the engine has a preliminary figure of 5.4 seconds to reach 62mpg, with an electronically limited top speed of 155mph.

The latest generation quattro all-wheel-drive features torque-vecotring for optimum tracktion, stability and response will be standard for the 3.0 TDI 245PS and 3.0 litre TFSI petrol models. For the top of the line engines an optional quattro sport differential will be offered as an option, which can distribute torque between the rear wheels.

The MMI with 6.5 inch retractable monitor and large central control knob are a central focal point, and provides access to the audio system, the Bluetooth phone interface and SD card based navigation system, which also coems as standard.