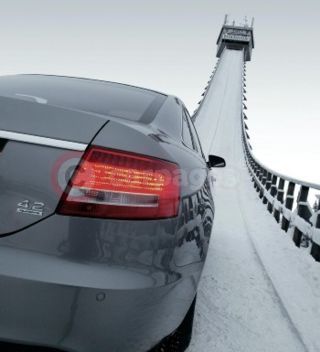 Fourteen years after rally ace Harald Demuth drove up Finland’s Pitkävuori ski jump in a red Audi 100 CS quattro, setting a new record in the process, Audi engineer Uwe Bleck has just followed suit in the 335PS V8-powered A6 4.2 quattro. Like its predecessor, the A6 highlighted the exceptional traction advantages of the quattro system by reaching a height of 47 metres on a gradient of around 80 per cent or 37.5 degrees, and parking on the slope.

For complete authenticity in the 2005 advertisement, the original timber-framed Pitkävuori ski jump, 300 miles north of Helsinki, was used again, despite the fact that it was closed in 1994 and needed extensive repairs before filming could commence.

In first gear, at 4,200rpm and travelling at about 37mph, the A6 stormed up the 80 per cent gradient with incredible ease, arriving at the 47-metre-high starting gate normally reserved for skiers only nine seconds after take-off. Uwe Bleck repeated this process a total of eleven times for the advertisement, and said later: “I could have gone faster, even at the steepest point.”

The toughest test facing the all-Audi team behind the orchestration and filming of the advert was keeping the A6 stationary at the top of the narrow, slippery jump. To achieve this a special ‘roll back safety device’ was built on a steel base plate and fitted to the under-body of the A6. The sledge-like unit prevented the car from sliding back once it had come to a stop, but was not able to pull it.

The only other very minor changes were to the automatic transmission, which was fixed in first gear to prevent the usual slight momentary power losses during gear changes, and to the wheels, which were fitted with rally-style tyres with six millimetre spikes. Otherwise the A6 4.2 quattro was a completely normal production model.

This remarkable new Audi advertisement has been showing on television in mainland Europe since March 5th, and may also be adapted for cinema presentation. It has not yet been decided if Audi UK will integrate the campaign into its 2005 advertising strategy.