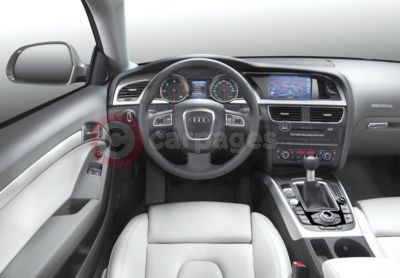 The two V6 TDI engines available at launch are both derived from the advanced common rail, piezo-injected units powering A4 and A6 models, but in the A5 the outputs of the 2.7-litre and 3.0-litre units have increased to 190PS and 240PS respectively. The A5 2.7 TDI can accelerate from rest to 62mph in 7.6 seconds and reach a maximum speed of 144mph, while at the same time returning up to 42.1mpg, and the A5 3.0 TDI quattro reduces the acceleration time to just 5.9 seconds and increases the maximum speed to 155mph. Despite being second only to the awe-inspiring 500PS Q7 V12 TDI in terms of acceleration, the A5 3.0 TDI quattro nevertheless manages to cover up to 39.2mpg (combined cycle). Both versions are fitted with a Diesel Particulate Filter (DPF) as standard.

A 4.2-litre V8 FSI petrol unit is reserved for the S5 quattro. With 354PS and 440Nm of torque available from just 3,500rpm, it powers the new flagship to 62mph from rest in 5.1 seconds on the way to a governed top speed of 155mph, all the while revving exceptionally freely and accompanying the rich seam of power with a classic bass-heavy V8 soundtrack.

A six-speed, close ratio manual gearbox is fitted as standard to all A5 models, and also to the S5 quattro, and for front-wheel-drive versions there will be the option of a new version of the acclaimed Audi multitronic continuously variable automatic transmission (CVT). Now featuring eight fixed ratios in its ‘manual’ mode, this advanced transmission actually boosts fuel economy compared with a manual equivalent in many cases, without impacting significantly on performance.

Inside, A5 and S5 models combine space for four adults with up to 455 litres of luggage space in the metre-wide load bay, which is further expandable by releasing the split/folding rear seat back rest.

In the best traditions of the Vorsprung durch Technik brand the latest technology is also very much in evidence, and includes a new ‘comfort key’ which dispenses with the conventional key bit and instead communicates electronically with the car’s electrical system as soon as it enters the cockpit. The sophisticated and compact new device can also store important information, such as current mileage and warning messages from the A5’s Driver Information System, which can be read by Audi Centre technicians to expedite the servicing process.

Audi A5 Images may not be UK specification cars. Colours and exterior and/or interior elements may differ from actual models.