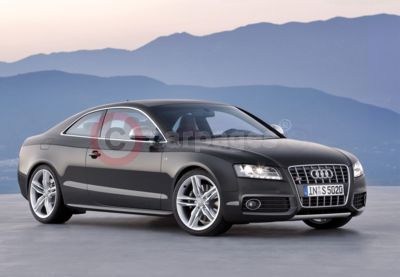 Audi strikes out in yet another new direction at the 77th International Geneva Motor Show (March 8-18) with the all-new A5, a dramatically styled coupé combining four-seat practicality, 455-litre luggage capacity and an all-new driver-oriented sports chassis with a configuration that is an equally radical departure for the brand. UK prices for the first phase of A5 models, which have been released for order this week, range from £30,175 OTR to £34,360 OTR, and first deliveries are expected in July.

In a break with Audi tradition which normally dictates that the launch of the higher performance S quattro model in each range is staggered, Geneva will also host the world debut of the S5 quattro, powered by a potent 4.2-litre V8 FSI petrol engine with 354PS and priced at £40,025 OTR.

At 4,630mm in length, and with a range of longitudinally mounted engines that in the UK will initially include two V6 TDIs and two direct injection petrol FSI V6s, the new A5 is perfectly positioned as an alternative to established German premium sector coupés in the B-segment.

The elegant two-door body that transports Audi into territory last populated by the brand with the 80-based Coupé of 1989 is not the newcomer’s only mould-breaking feature. Underpinning it is a radically different suspension arrangement that is the first to feature not only a new five-link front set up promoting outstanding composure at all speeds, but also a new layout that positions the front axle further forward, permitting shorter overhangs and much improved axle load distribution for enhanced balance and handling neutrality.

The rack-and-pinion power assisted steering has also been both completely re-engineered, and repositioned ahead of the front axle closer to the wheel centre line to provide an even more direct feel and improved response.

At the rear, completely re-engineered trapezoidal link suspension plays its part in delivering slick sports coupe handling with an unruffled ride, and in quattro versions the latest generation rear-biased system with 40 / 60 front-to-rear torque split helps to further emphasize the advances made.

The already highly advanced FSI direct injection petrol and common rail direct injection TDI engines powering the new A5 have also evolved further in the transition to the new coupe, the improvements to the petrol units in particular bringing significant gains in fuel economy and reductions in CO2 output.

The first phase of UK models will feature a new generation 3.2-litre FSI petrol unit with 265PS which is capable of achieving 32.7mpg on the combined cycle and yet, with the help of 330Nm of torque, can power the A5 3.2 FSI quattro to 62mph in 6.1 seconds before the electronic governor cuts in at 155mph (where conditions allow).

The optimum efficiency of this V6 comes courtesy of the advanced Audi valvelift system, which varies valve lift between two levels through the use of sets of sliding cams mounted directly on the intake camshafts. These feature two sets of adjacent cam contours for small and large valve lift, and the power demanded by the driver at any one time dictates which cam is used to open the intake valves.

Audi A5 Images may not be UK specification cars. Colours and exterior and/or interior elements may differ from actual models.