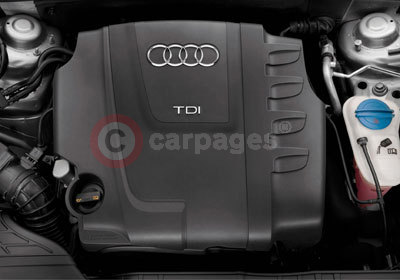 Audi introduced the TDI principle to the market in 1989, and since then has made strong and steady progress in this technological area. Two Le Mans race wins by the R10 racing car in 2006 and 2007 are ample evidence of the benefits of TDI power. All the TDI engines for the new A4 have diesel particulate filters as standard equipment and are already prepared for compliance with the forthcoming Euro 5 emission limits.

The new A4 is initially available with a choice of three diesel engines – two V6 units and a four-cylinder inline engine. The two V6 TDI engines are from the Audi vee engine family, and are characterised by a 90-degree included angle between the cylinder banks. With displacements of 3.0 and 2.7 litres, they are compact and lightweight.

The 3.0 TDI has been so thoroughly revised in design that it can be regarded as a largely new engine. It now develops 240PS and has an impressive maximum torque output of 500 Nm. This ultra-powerful TDI, which has a displacement of 2,967 cc, enables the A4 3.0 TDI quattro to accelerate from 0 to 62mph in only 6.1 seconds, and on to a top speed of 155mph – yet the average fuel consumption is an impressively miserly 40.9mpg. The 3.0 TDI is equipped with quattro permanent four-wheel drive and a six-speed manual gearbox.

Compared with the engine in the outgoing model, which developed 233PS and was capable of covering up to 37.6mpg, maximum torque is now 50 Nm higher, and is available from 1,500 to 3,000 rpm. The maximum engine speed is also 400 rpm higher, with the full rated power output available from 4,000 to 4,400 rpm.

The V6 TDI has an engine block made from vermicular-graphite cast iron, a lightweight material that is also extremely rigid – an essential for smooth running. The pistons have friction-optimised rings, and the chain drives to the camshafts and auxiliaries have also been improved.

Fuel injection on the V6 TDI engine is by a third-generation common-rail system with eight-hole injectors. It operates at a high pressure (up to 1,650 bar), which ensures even finer atomisation of the fuel, better mixture formation and more efficient combustion. The injectors use the piezo principle, and the system features a separate high-pressure pump and rail for each row of cylinders. Up to five separate amounts of fuel are injected on each working stroke.

The 3.0 TDI engine uses the latest type of VTG (variable turbine geometry) turbocharger. A fast electric adjusting motor moves its guide vanes, so that high torque builds up freely. The turbocharger is located in the vee between the cylinder blocks. The charge-air intercooler is also new. It is installed transversely ahead of the radiator in an ideal position for optimal cooling, and has a high thermal efficiency rating. The charge air supplied to the engine is cooled from 184 down to 69 degrees Celsius. Cooling the airflow compressed by the turbocharger increases the volume of charge air entering the cylinders.

The revised 3.0 TDI is notable not only for its low fuel consumption but also for its especially clean exhaust: the limits that will apply when Euro 5 legislation comes into force are already complied with. A new exhaust gas recirculation concept reduces emissions of oxides of nitrogen. It has a much higher cooling rate, thanks to greater EGR cooler efficiency and reduced flow resistance.

A diesel particulate filter is used to reduce soot emissions: it cuts the already low level of untreated emissions further, by more than 90 per cent. The filter is installed close to the engine, so that only a small amount of heating energy is required for its regeneration. A small oxidating catalytic converter is installed ahead of the particulate filter: since it is located directly after the turbocharger, it also benefits from the rapid heat build-up.

The second six-cylinder TDI is more economical than even the 3.0 TDI, with a combined consumption figure of 42.8mpg. Like the 3.0 TDI, the 2.7 TDI already complies with future EU 5 limits. A major element in achieving this has been the Bosch piezo common-rail system, which uses injection pressures of up to 1,800 bar. The 2.7-litre engine, like the larger unit, is from the Audi vee-engine family. It has a power output of 190PS and delivers an impressive 400 Nm of torque all the way from 1,400 to 3,250 rpm, an improvement over the outgoing 2.7 TDI unit’s 180PS and 380Nm.

The 2.7-litre engine has a stroke of 83.1 millimetres, 8.3 less than the 3.0 TDI. With the unchanged bore of 83.0 mm, this yields a displacement of 2,698 cc. The A4 2.7 TDI is initially available in the UK exclusively with multitronic continuously variable automatic transmission (CVT), combined with front-wheel-drive. It is capable of reaching 62mph from rest in 7.7 seconds, and has a top speed of 140mph.

The four-cylinder TDI that also powers the first phase of A4 models ushers in a new generation of efficient, highly responsive diesel engines from Audi. The latest 2.0 TDI now incorporates common-rail fuel injection, the piezo injectors of which operate at a maximum pressure of 1,800 bar, and a whole series of additional innovations. This two-litre engine also complies with proposed EU 5 emission limits.

Later this year the A4 2.0 TDI will be available with multitronic continuously variable transmission. Both this and the manual-gearbox version drive the front wheels.

In the new Audi A4 the 2.0 TDI engine is installed at an angle of 20 degrees to the right, which has necessitated certain changes to the oil sump and crankshaft. The most interesting development, however, is the addition of common-rail injection, controlled by one of the most modern engine-management systems on the market, which supersedes the previous pump-injector units.

Like the 3.0 TDI, the 2.0 TDI features modern piezo injectors and eight-hole injector nozzles. The degree of precision to which up to five injection strokes per operating cycle can be modulated has the effect of audibly reducing the noise level. The single-piston high-pressure pump builds up a full system pressure of 1,800 bar, which results in very fine atomisation of the fuel and accurate, efficient combustion.

Work has also been carried out on the toothed belt drive to improve its acoustics, with additional noise-reducing structures on the belt cover. As on the previous engine, two balancer shafts reduce the vibration generated by the crankshaft and reciprocating parts.

The 2.0 TDI, which has a 16.5 : 1 compression ratio, has a number of other special features that also improve its performance potential. Its new generation turbocharger has adjustable guide vanes on the turbine side to enable more rapid torque build-up, and a pulsation damper to reduce vibration. Electric motors control the position of the swirl flaps in the intake pipe: these modify the incoming airflow continuously to match engine load and speed.

Optimised intake-air management and modified piston geometry have increased the maximum engine speed to 5,000 rpm, and have improved the thermodynamic situation in the combustion chambers. As a result of these measures, the 2.0-litre TDI can be operated with a high rate of exhaust gas recirculation (up to 60 per cent)

Combustion takes place at a lower temperature and oxygen level, so that untreated emissions of oxides of nitrogen are lower. To achieve this, Audi has given the four-cylinder engine a switchable EGR (exhaust gas recirculation) system that has a high cooling rate. The oxidating catalytic converter has been improved and combined into a single unit with the maintenance-free diesel particulate filter. Both of them are located close to the engine and therefore reach their operating temperature quickly.

The 2.0 TDI already complies with the EU 5 emission limits that will probably come into force in 2010, and which will call for a further reduction in the level of oxides of nitrogen. This makes it necessary to reduce the combustion temperature, although this in turn has a negative effect on efficiency. Audi engineers have nevertheless risen to the challenge, succeeding in averting the risk of poorer fuel consumption and in fact achieving a slight improvement in this respect.