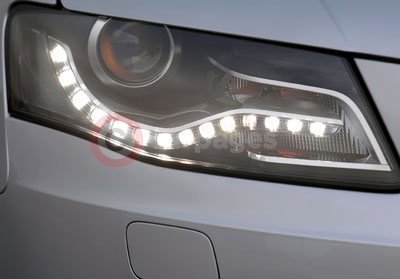 Occupant protection reaches the highest possible standard in the new Audi A4. If a frontal collision should occur, it protects its occupants with a sequence of measures, the precision of which sets new standards for a midsize car. In the very earliest stages of the crash, two acceleration sensors begin to transmit their signals to the central control unit; they are located below the headlights so that no time is lost in securing this initial information.

As the impact progresses, the front cross-member distributes the forces to both side members, which thanks to their carefully computed geometry and choice of materials deform to a predetermined degree to absorb this energy. The aluminium frame element for the engine and front axle acts as a further force absorption level by diverting forces and moments in a controlled manner into the floor and tunnel structure of the occupant cell. The steering column can be forced back by a maximum of eight centimetres, and the main elements of the pedal assembly released from their mountings.

Sensors on the seat rails check the seated position adopted by the occupant and transmit this data to the control unit as information for the computing process. In this way the computer knows how far the seat occupant is from the airbag and can ensure that the amount of forward movement, during which the seat belt and the airbag can restrain the body, is optimally utilised.

The airbags in the new Audi A4 are adaptive. The conventional technique is for the two airbag stages to be triggered one after the other; if the impact is not too severe, the first stage alone is sufficient, whereas in a more violent collision the second stage also comes into play.

In contrast, the airbags in the Audi A4 are always inflated fully. If the control unit assesses the situation as relatively harmless, that is to say if the impact is not too violent and the seat occupant is sitting close to the cockpit, part of the gas from the airbag is discharged again through valves, so that the head and chest of the occupant are restrained without undue force. If the crash is severe, the airbags remain fully inflated for longer. The true innovation, however, is that the same procedure is adopted after a less severe impact if the passenger is sitting so far back that his or her upper body moves forward with too much kinetic force.

The seat-belt force limiters also use an adaptive operating principle, with two integral torsion bars connected together by gearwheels. In less critical situations, the torsion bars are separated at an earlier stage in the accident. This gives the belt a greater range of movement – the seat occupant’s upper body plunges relatively deeply into the airbag and the load that has to be withstood in the chest area is reduced. In a severe accident, on the other hand, the torsion bars are either disconnected later or remain coupled together, so that the seat belt restrains its wearer more firmly.

In the event of a side-on impact, acceleration sensors in the C-pillars and ultra-modern pressure-change detecting sensors in the doors trigger the alarm. The B-pillars, which guide part of the incoming forces into the roof frame, the sills and two cross-members in the floor between these, perform most of the deformation work, aided by the doors. The edges of the doors overlap the pillars, sills and roof frame and can therefore bear against these elements and help to maintain the strength of the overall structure.

The new A4’s doors also help to boost protection – they are made in a single piece, unlike those on the previous model, which had a separate aluminium window frame. The frames and the impact-absorbing support members made of high-strength steel are now integrated into the body-in-white structure, so that the doors are lighter in weight but also more rigid. The close proximity of the support member to the door hinge enables forces to be deflected into the B-pillar.

Inside the car, sidebags with a volume of 13 litres are integrated into the front seats (12-litre sidebags are an option for the rear seats), and large window bags (25.5 litres) cover the glass between the A- and C-pillars. The driver and front passenger in the new Audi A4 are effectively protected by variable-height seat belts, head restraints with a generous amount of vertical adjustment and anti-submarining ramps in the seats.

Isofix mountings are fitted as standard to front and rear seats so that modern child seats can be attached quickly and safely.

The fuel tank, with a capacity of 65 litres in front-wheel-drive versions and 64 litres in the quattro models, is constructed from six layers of plastic and can withstand very severe loads. After an accident, the control unit releases all the door locks, and at the same time the high-current line between the battery, starter motor and alternator is disconnected. However, the electrical energy supply to important components such as the occupant restraint systems, the hazard warning flashers and the door electrics remains active.

With the benefit of the Audi backguard system, the seats and head restraints in the new Audi A4 are designed to provide reliable protection against injuries to the upper bodies of the front passengers in the event of a rear-end impact. This special ‘Whiplash’ system has obtained “good” ratings in independent tests. If the rear-end collision is severe, the seat-belt tensioners are triggered in order to hold the occupants in the safest possible position in their seats.

The new A4 is one of the very first cars to comply with all the new Japanese and European regulations governing collisions with pedestrians. Foam material ahead of the bumper cross-member, ample deformation space and sheet-metal zones designed to deform effectively are among the specific features, together with special front-wing mountings designed to yield on impact.

The engineers were tasked with developing a body with minimum weight but high dynamic rigidity in all areas. Compared with the already excellent values achieved by the previous model, they achieved a five per cent improvement in this respect.

The standard A4’s drag coefficient of 0.27 is an unsurpassed value for a midsize saloon. Depending on which engine is chosen, the new A4 is between five and eight per cent more streamlined than the previous model. Although the wider body increases the frontal area from 2.14 to 2.19 square metres, overall drag has been reduced by three to five per cent.

60 per cent of total aerodynamic drag comes from the car’s body: the majority of what remains is due to the underfloor area, with a major contribution from the wheels and wheel arches. By providing a smooth underfloor over almost the entire area, the aerodynamicists succeeded in reducing the drag coefficient by 0.039. This result also makes itself evident in the form of higher performance and lower fuel consumption: CO2 emissions are reduced by about three grams per kilometre. The plastic underfloor panels also protect the sheet metal of the bodyshell and the mechanical assemblies against salt, moisture and stone impact, and allow the previous PVC underseal to be dispensed with.