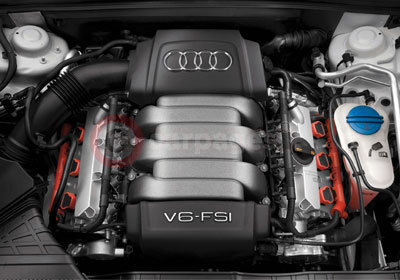 The new Audi A4 launches in the UK with a choice of four responsive and refined engines which consume an average of nine per cent less fuel than corresponding units in the outgoing model. All of them have direct fuel injection, the petrol engines employing FSI technology and the three TDI units the common-rail principle. All the four-cylinder engines are turbocharged.

The first petrol engine to arrive will be the 3.2 FSI V6 developing 265PS. It will be followed by the four-cylinder 1.8 TFSI with a power output of 160PS. Both units use FSI petrol direct injection technology, the naturally aspirated 3.2 FSI combining this with the innovative Audi valvelift system; the 1.8 TFSI has forced aspiration by turbocharger.

The FSI system injects petrol directly into the combustion chambers rather than via the intake manifold, and consequently makes more economical use of fuel, with obvious benefits for overall efficiency.

FSI first demonstrated its performance potential in June 2001, when an engine featuring petrol direct injection technology took the Audi R8 sports-car prototype to overall victory in the Le Mans 24 Hours. In the years that followed, the car was entered for 80 races and won 64 of them – evidence not only of the power developed by its engine but also of the refusal to compromise on reliability and quality that is typical of the Audi attitude to both motor sport and series production.

With a 90-degree included angle between the cylinder banks, compact dimensions and an aluminium-silicon alloy block, the highly sophisticated unit is not only space efficient but also impressively light by class standards, with a low weight of just 171 kilograms. This not only helps to pare back the overall weight of the new Audi A4, but also gives it optimal axle-load distribution to maximise handling balance.

With a displacement of 3,197 cc, the largest V6 develops 265PS and delivers its maximum torque of 330 Nm all the way from 3,000 to 5,000 rpm. It can power the Audi A4 3.2 FSI quattro with manual gearbox from 0 to 62mph in just 6.2 seconds, and on to its governed top speed of 155mph. The benefit of FSI power is equally evident in the impressive combined fuel consumption figure of 30.7mpg

From 2008 on, the 3.2 FSI quattro will be available with tiptronic six-speed automatic transmission; all versions of this model transmit their power to the road by means of quattro permanent four-wheel drive.

The considerable improvement in fuel consumption compared with the previous generation, 255PS engine is due in no small part to the Audi valvelift system: with this new valve operating technology, the engine uses at least five per cent less fuel.

Whereas previous valve lift control systems have needed complicated elements between the camshafts and the valves, Audi has moved the actuating principle directly to the camshafts to improve efficiency. The V6 engine’s inlet camshafts are provided with splines that carry cylindrical sleeves. These cam elements have two different profiles, one for low valve lift, the other for full valve lift. Metal pins actuated by an extremely rapid electronic shift system engage in spiral grooves on the sides of the revolving cam elements and displace them by seven millimetres along the camshafts.

During part-load operation, the lower cam profiles actuate the valves’ roller cam followers. The valves then open by either 2.0 or 5.7 millimetres. This difference in valve lift introduces a controlled degree of turbulence in the mixture as it forms in the combustion chamber, and ensures particularly clean combustion.

At full load, the larger cam profile comes into use, for a valve lift of 11.0 millimetres. The changeover takes place at any engine speed between 700 and 4,000 rpm, and is completed within two turns of the crankshaft.

A series of accompanying measures are applied by the new, highly intelligent engine management system to make the transitions smooth and unnoticeable. All the driver senses is an unbroken build-up of power and keen throttle response.

Thanks to its uncomplicated layout, the system is rated for engine speeds up to almost 7,200 rpm, so that high power outputs are possible. The Audi valvelift system achieves its greatest potential for fuel economy at constant road speeds in the moderate part-load operating range.

FSI petrol direct injection is another major step forward in automotive technology: it injects the fuel directly into the combustion chambers at pressures of up to 100 bar. As the fuel evaporates, it draws heat out of the combustion chamber surface. This permits the high compression ratio of 12.5 : 1 to be used, which greatly increases combustion efficiency. Depending on load and engine speed, an electronically controlled flap in the plastic intake pipe switches over from the longer air-intake path that increases the engine’s pulling power to a shorter path for maximum power output.

As is typical of Audi vee engines, the timing chains that drive the camshafts are located at the rear of the engine in order to save space. The sprockets and intermediate gears now have more teeth, for quieter running and reduced loads on the chains. A similar effect is achieved by the tri-oval, i.e. very slightly triangular, shape of the chain sprockets. The three single-roller chains are also of a new design, for smooth running and maximum wear resistance. They need no routine maintenance and do not have to be changed throughout the engine’s operating life.

The oil pump has also been extensively modified. Its delivery volume has been reduced by 30 per cent, and it now operates by varying the volumetric flow according to actual demand. At an engine speed of 4,600 rpm, the pump switches from the low to the high pressure stage, after which the oil spray jets for the underside of the piston crowns are brought into action to avoid peak temperatures. A combined coolant radiator/oil cooler is installed immediately adjacent to the pump.

Taken together, all these measures – which include a smaller water pump and reduced piston-ring pressure – have significantly reduced the engine’s friction losses. The mean friction pressure at 2,000 rpm has gone down by 0.22 bar, equivalent to 25 per cent. This has yielded a fuel saving of approximately five per cent.

The smaller of the two petrol engines also underlines Audi’s leading position in engine design. The completely new 1.8 TFSI unit combines the advantages of direct injection and turbocharging to deliver strong performance and keen response with low fuel consumption and emissions. This four-cylinder engine develops 160PS and maximum torque of 250 Nm, which remains available over the entire engine-speed range from 1,500 to 4,500 rpm. In conjunction with a six-speed manual gearbox, it delivers a top speed of 140mph and acceleration from a standing start to 62mph in 8.6 seconds, yet also manages to undercut its predecessor – the 150PS 1.8 T – in terms of fuel economy, covering up to 39.8mpg on the combined cycle.

This engine is initially offered in conjunction with six-speed manual transmission, but the outstandingly efficient multitronic continuously variable automatic transmission (CVT) will become available as an option later this year.

For the 1.8 TFSI, Audi’s engineers have carried out intensive development work on the concept first introduced three years ago as the 2.0 TFSI. Since 2005, the two-litre engine has been voted ‘Engine of the Year’ three times in succession by an international jury of journalists. Despite its lower displacement, the turbocharged 1.8 TFSI delivers as much power as a naturally aspirated V6 offered only a few years ago, but consumes far less fuel.

The 1.8 TFSI engine block has little in common with the previous 150PS engine which powered A3, A4, A6 and TT models, apart from the 88-millimetre cylinder spacing. The crankcase is of grey cast iron, which has good noise-absorbing properties. It weighs only 33 kg, and the complete engine tips the scales at a mere 135 kg.

There are two contra-rotating balancer shafts in the crankcase to suppress the free second-order inertial forces generated by this type of engine. The rigid basic structure of the block and its add-on elements and covers also help to eliminate drumming and vibrations.

The chain that drives the balancer shafts has also been designed for quiet running. A further chain runs to the oil pump: this has volume-regulated delivery and two-stage pressure control to further reduce fuel consumption. A third chain drives the two camshafts. A new development is the extremely responsive adjuster that turns the inlet camshaft steplessly through up to 60 degrees of crankshaft rotation.

For the 1.8 TFSI, Audi’s engineers have increased the fuel injection pressure to 150 bar. The high-pressure pump, a new development, is driven by a four-lobe cam on the exhaust camshaft. The six-hole injectors, which are also new, distribute fuel accurately in the combustion chambers so that an efficient combustion process can take place.

Combustion air is supplied to the cylinders by a Borg Warner Type K03 water-cooled turbocharger. Its turbine casing is integrated into the exhaust manifold to form a single high-alloy grey cast iron module. An optimised turbine wheel improves initial response at low engine speeds. At 2,000 rpm, the 1.8 TFSI needs only 1.2 seconds to build up its maximum torque of 250 Nm. The previous 1.8-litre engine needed 1.7 seconds to reach its maximum torque of 225 Nm.

In the air intake system, a new design of charge-movement flap valve generates the turbulence needed to create a high-quality, homogeneous fuel-air mixture. The charge-air intercooler is also a new development and is notable for its high efficiency, low weight and compact dimensions. All the turbocharged engines for the new Audi A4 have the intercooler mounted below the front bumper cross-member and ahead of the radiator, a position which locates it in the airflow from the cooling fan.