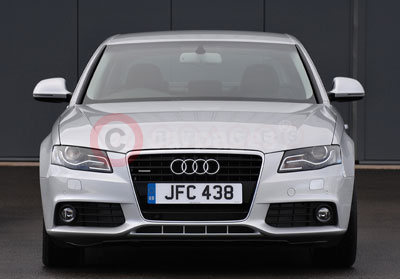 The all-new, fourth generation Audi A4 makes its UK specification debut this week, accentuating more fully than ever before the attributes which helped the 1994 original to spearhead the transformation of the Vorsprung durch Technik brand. Priced from £23,940 OTR, the A4 Saloon is available to order now and will reach its first UK customers in spring 2008.

Thanks to a combination of leading edge technology and a new chassis with longest-in-class wheelbase, the newcomer can number significant gains in both driver appeal and cabin space among its long list of advantages. It debuts with four new or extensively revised direct injection engines, comprising the 265PS 3.2-litre V6 FSI petrol and three common rail TDI turbo diesels – the 143PS 2.0-litre four-cylinder, the 190PS 2.7-litre V6 and the 240PS 3.0-litre V6. A new lead-in engine for the petrol range – the 160PS 1.8 TFSI – will be available from March 2008. All are available initially in conjunction with a generous SE specification, which will be complemented from April 2008 by a more performance-oriented S line trim option.

The majority of new Audi A4 Saloon models in the first phase are equipped as standard with a six-speed manual gearbox, the one exception being the 2.7 TDI which launches exclusively with an updated and even smoother version of the ultra-efficient multitronic continuously variable automatic transmission (CVT). The most powerful petrol and TDI versions of the new A4 Saloon are equipped with latest generation quattro four-wheel-drive system with 40:60 front-to-rear torque split, and are also available with the option of an extensively revised, faster-shifting six-speed tiptronic stepped automatic.

The gains in both interior accommodation and chassis composure compared with the outgoing Audi A4 have been achieved with the help of the longest wheelbase in the class. With a completely new suspension and steering configuration, it sites the front axle with its sophisticated new five-link set-up 154mm further forwards than in the existing car, reducing overhang and optimising weight distribution for outstanding handling balance.