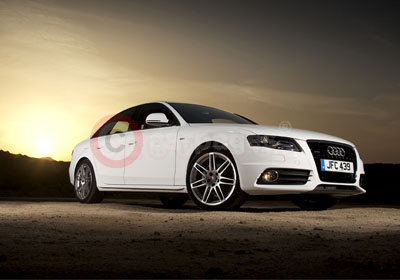 By midsize standards, the new Audi A4 is an exceptionally large, spacious saloon. Its wheelbase of 2,808 millimetres is not only longer than its predecessor but also distinctly longer than its competitors, contributing to much improved cabin space and a high standard of dynamic stability

The main contributing factor to these enhancements has been the repositioning of the front axle further forward. This was made possible by moving the differential to the front of the driveline, where the clutch or torque converter was formerly situated. This layout has already proved successful in the large A8 luxury saloon.

One of the new A4 saloon’s major strengths is its low weight, which obviously benefits everything from ride comfort and dynamic ability to fuel consumption. The 2.0 TDI, for example, tips the scales at a comparatively modest 1,460 kg, and the 1.8 TFSI petrol version that will follow later in 2008 manages to weigh in at an even lighter 1,410kg. Iron and steel account for 32.0 per cent of the total weight, closely followed by aluminium and magnesium at 31.7 per cent.

The low weight is also attributable to the exceptionally light steel bodyshell. Although it is almost twelve centimetres longer and more than five centimetres wider than the previous model, the new A4 saloon weighs about ten per cent less. This was an ambitious target that Audi’s engineers solved by a total redesign of the bodyshell.

Audi has been among the automobile industry’s leaders in the field of intelligent weight-saving. By adopting aluminium, for instance, on its A8 and TT models, the brand has kept up the pressure on the steel industry for some years now, with the result that steel grades combining exceptional strength with low weight have now become available.

Audi’s high-tech production methods, including full galvanisation of the body shell, enable a twelve-year warranty against body penetration by rust to be offered.

In contrast to the previous model the Audi single-frame grille is broader and lower. For cars with a four-cylinder engine and on the 2.7 TDI, the mesh grille is painted Stone Grey; in the 3.2 FSI and 3.0 TDI it is finished in high-gloss Black.

Depending on the version, the headlights vary in a number of details. A strong visual impression is made by the “wing” elements in electrodeposited chrome, which differ considerably according to whether halogen or xenon plus headlights are specified. With halogen headlights, the wing has a second shorter element, whereas with xenon plus it takes the form of a single continuous curve.

A standard feature common to both systems is the daytime running light. In the halogen headlights, which are rated for an operating distance of over 62,000 miles, these are bulbs with a rating of just 13 watts. The xenon plus units, in which mercury is no longer used, each incorporate 14 white light-emitting diodes, with a total consumption of no more than nine watts.

Cars with a four-cylinder engine have twin exhaust tailpipes on the left; those with a V6 engine have two separate tailpipes, one on each side, with a milled finish. Both petrol and diesel-powered cars have straight exhaust tailpipes, highlighting the fact that Audi TDI engines equipped with the very latest exhaust gas recirculation, catalytic converter and Diesel Particulate Filter (DPF) technology are not only strong and efficient but also ‘clean’.

A further factor in the new Audi A4’s excellent balance is the relocation of the battery to the lower level of the boot. On both front-wheel-drive and quattro cars, the boot holds 480 litres, more than all its direct competitors. With a loading width of 1,000 mm throughout and a length of 1,067 mm, it can easily accommodate two golf bags placed sideways.

Among the many new A4 features more commonly associated with cars in the luxury class is the boot lid opening system. At the touch of a button on the radio-operated remote control, on the driver’s door or in the handle recess, the boot lid swings up automatically on its innovative hinged arms. Closure remains manual but needs very little physical effort.

The standard split/folding rear seat backs are a useful feature for those who require flexibility and who have to transport bulky loads. The seat back catches can be released by handles from inside the car and folded down on to the seat cushions without the head restraints having to be removed. When they are folded, luggage capacity is increased to 962 litres. A through-load facility with removable ski bag is available as an extra cost option.