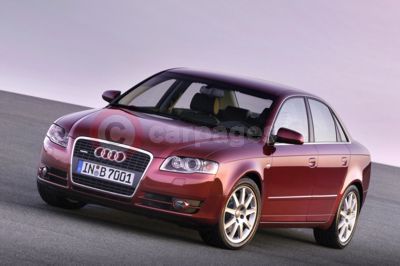 With considerably more power yet no more thirst for fuel, the latest generation Audi A4 3.0 TDI quattro is now available to order, featuring the 233PS version of the advanced V6 TDI engine that already powers A6 and A8 models in place of the original 204PS version used since launch.

The ultra-modern six-cylinder unit with common rail direct injection and piezo injectors made its A4 range debut in the new A4 Cabriolet, and propels the A4 3.0 TDI quattro Saloon to 62mph in an impressive 6.8 seconds on the way to a top speed of 152mph. Despite its 29PS power advantage, it manages to deliver the same 36.7mpg combined fuel economy figure as its 204PS predecessor, along with a comparatively modest CO2 output of 206g/km. This latest engine evolution is also equipped as standard with a Diesel Particulate Filter (DPF) to minimise particulate emissions.

Until June 30th 2006, the A4 3.0 TDI quattro - along with the majority of A4 Saloon and Avant models - is available with an upgrade to SE specification at no extra cost. In addition to standard equipment, SE specification adds 17-inch 16-spoke alloy wheels, an Audi Concert II radio with single CD player, cruise control, electric rear windows, aluminium window trims and the Audi Driver’s Information System (DIS).

Alternatively, it is also available as an S line model with a more overtly sporting bias courtesy of features such as 18-inch five-arm alloy wheels, exclusive S line body styling, sports suspension and sports seats and steering wheel. The full S line package is currently available at a reduced premium of £750.