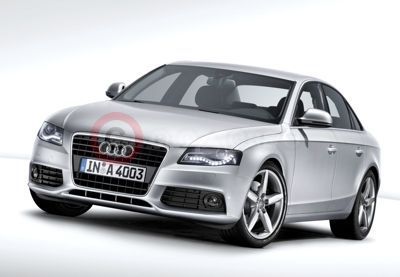 The all new Audi A4 Saloon - the sportiest car in the premium compact executive sector according to Audi - is revealed to the world in pictures this week ahead of its world debut on the show stand at the Frankfurt Motor Show (September 13-23).

Scheduled to open for UK ordering on the show’s Press Day on Tuesday September 11th 2007, the completely redesigned saloon sits on the longest wheelbase in the class, benefiting both interior space and chassis composure. In the interests of the latter, its completely new suspension and steering configuration sites the front axle 154mm further forwards than in the existing car, reducing overhang and optimising weight distribution for outstanding handling balance.

All new Audi dynamic steering and, for quattro models, the latest generation of the four-wheel-drive system with driver-oriented 40:60 torque split also help to reinforce the overtly sporting slant.

Externally, the 4,703mm long and 1,826mm wide new Audi A4 Saloon bears a strong resemblance to its elegant two-door A5 coupe relative, and the similarity is borne out by its impressively ‘slippery’ coupe-like drag coefficient of just 0.27. The optional LED strip daytime running lights which flank its headlamp units also emphasise its close genetic link.

In the appreciably more spacious cabin, the benefit of the longest-in-class 2,808mm wheelbase is evident particularly in the rear, where leg room has increased by 36mm, and the extra liberated space also shows in the larger 480-litre boot, which is expandable to a total of 962 litres.

In the best traditions of the Vorsprung durch Technik brand the latest technology is also very much in evidence, from the new ‘intelligent key’ which dispenses with the conventional key blade and instead communicates electronically with the car’s electrical system, to the new optional Audi Drive Select technology influencing the car’s responses.

At the touch of a button Audi Drive Select enables accelerator pedal response, transmission shift points, power steering assistance and shock absorber characteristics to be adjusted by the driver, who has a choice of three preset modes - comfort, auto and sport. An ‘Individual’ mode also enables preferred settings for all of these to be fine-tuned even further.

Advanced features from the executive class A6 Saloon have also been adopted by the new Audi A4, including a space-saving electromechanical parking brake, the acclaimed Multi Media Interface operating system (MMI) and the exceptional DVD satellite navigation option with TMC congestion avoidance system and 7-inch colour monitor. Luxuries such as ventilated ‘climatic comfort’ seats and a 505-watt Bang & Olufsen audio system are also available at extra cost.