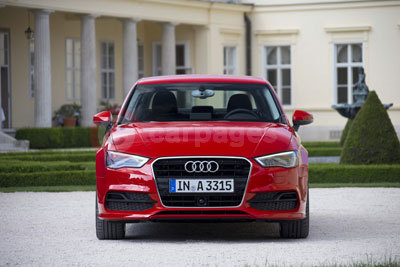 There seems to be no let-up in Audi’s rapid range expansion, and here is yet another addition to the growing collection of models that wear the four interlinked rings. Following quickly on from the Audi A3 hatchback in three and five-door versions, this svelte four-door-saloon has joined the family, with a cabriolet on the way as well. The car we test here is the first ever ‘three-box’ saloon in the history of the A3, which dates back to the original model in 1996. Now in its third generation, the current A3 first arrived as a three-door hatchback in September 2012, joined by its siblings at six monthly intervals.

The saloon is the largest member of the family, almost four and a half metres in length, and 14 cm longer than the five-door A3 Sportback. They share the same wheelbase though. The saloon is also about one cm wider and its roofline is about the same amount lower than its five-door Sportback sister model. This change in dimensions allows the passenger room to stay the same as in the hatchback versions, but packs a bit more room into the boot.

The A3 Saloon joins the UK market in September 2013 and is available with a choice of petrol and diesel engines, from 1.4 to 1.8 litre TFSI petrol units and 1.6 or 2.0 litre turbodiesels. Transmission choices are six-speed manual or seven-speed automatic. Trim levels are SE, Sport and S line.

Prices are from £24,305 to £28,105.The A3 Saloon was designed in Germany but is built at a factory in Gyor, Hungary. Audi expects this version to account for about ten per cent of overall A3 sales.

But for anyone keen to maximize economy and who wants their emissions to be as low as possible, the 1.6 litre diesel will be a good bet. On sale in the UK a couple of months later than our test car, and in showrooms from December 2013, the 1.6 TDI versions has a 105 bhp power output and the lowest CO2 of any A3 Saloon model at just 99 g/km. Although not as gutsy as this one, it is also a very respectable performer and does not seem at all underpowered.