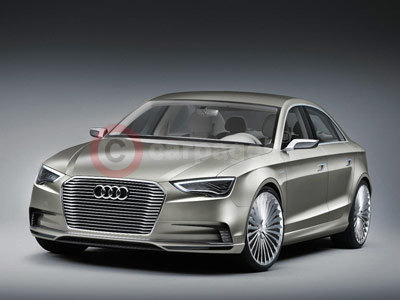 Audi will unveil the Audi A3 e-tron concept in Shanghai. A four-seat notchback saloon featuring new technologies such as the MMI operation system, an infotainment system and plug-in hybrid engine.

The Audi A3 e-tron concept features lithium-ion batteries located behind the rear seats. With a charge capacity of 12 kWh the concept can achieve a range of up to 34 miles on electric power alone. The batteries can be charged from a household socket, meaning in most cases the car can provide a completely emission free driving experience for city driving.

A seven speed S tronic serves as the transmission. Two transmission structures are operated by two clutches. Gears are alternatively shifted by the two clutches quickly, smoothly and without any noticeable interruption of traction.

Behind a compact flat bottomed three spoke multifunction steering wheel is a display that makes the individual driving states of the hybrid drive clear. There is no tachometer, instead there is a "power meter" with a needle which indicates the total system output on a scale of 0 to 100 per cent. A second scale which is divided into green and orange coloured segments, indicating where the Audi A3 e-tron is drawing its power - from the electric motor, combustion engine or a combination of both.

The centre console features four large round air vents, reminiscent of a jet's design, which can be adjusted by pushing and pulling on the centre axis of the vents. Control knobs, mirroring the design of aeroplane turbines, for the automatic air conditioning system are located in the lower section of the centre console on a raised, dedicated control panel.

Between the two large round dials sits an eight inch display providing the driver information system. This display and the MMI system monitor provide the operating states and power flows in the hybrid system with graphics featuring a three dimensional effect.

The Audi A3 e-tron concept features a luggage compartment volume of 410 litres and low loading lip.